/** * The header for our theme. * * Displays all of the section and everything up till
* * @package pandrah */ ?> PRESS CONFERENCE QUOTES FROM MATCHROOM BOXING USA IN BOSTON – The Pugilist 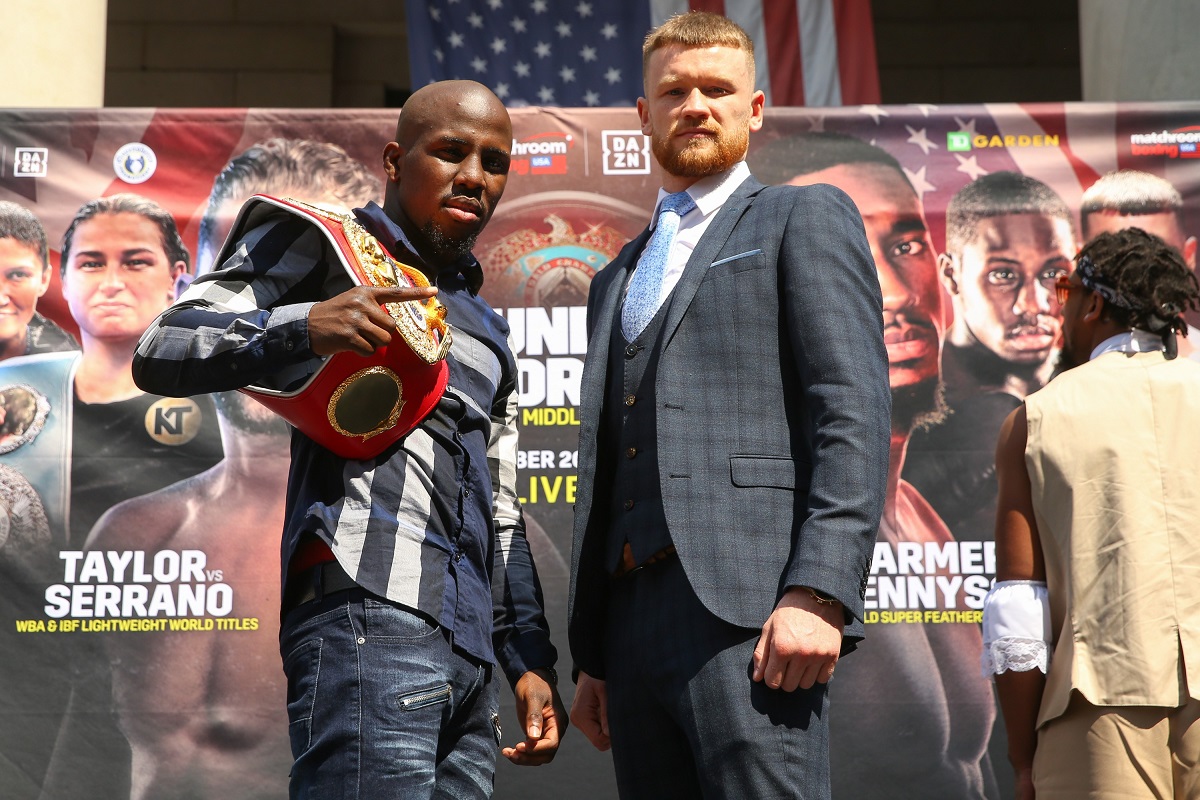 “I am thrilled to be bringing this triple-header of World championship action to the TD Garden in Boston.

“We want to take major fight nights to major cities across America that haven’t had the chance to witness this great sport in the flesh, that’s why we’re in Chicago on October 6 and then in Boston on October 20 – we’re taking this great sport to great cities in great arenas like the TD Garden with the best night of boxing the city has seen.”

“This is such a big fight. The two main men at Middleweight at the moment is GGG and Canelo – and neither of them want to fight me or Demetrius. There’s a lot of smoke and mist in the division right now, and when it clears up I will be the man standing there.

“All jokes and trash talk aside, this is going to be a really good fight. Does anyone want to fight Demetrius? No. Does anyone want to fight me? No. We have to fight each other to prove who the number one guy is. Technically, we are the best two in the division, and the winner is going to be number one. I’m World champion, I’ve been more active, I’ve boxed the better opposition – but I have to beat this man.

“There’s too much at stake in this fight to even think about losing – and I will prove that I am number one. If I turn up at my 100 per cent best, it’s good enough to beat him. He’s a great fighter and he’s been avoided, our paths have crossed and we have to fight. The winner is number one.”

“It’s an honour to be fighting at the TD Garden, we’re giving you the best fight in boxing this year, you have to be there.

“Billy Joe is a great fighter, an undefeated southpaw, he’s ugly looking, but he can fight – but your boy Demetrius Andrade always come through. Never have I failed to come out with the victory.

“It’s going to be an entertaining build up and I’m thrilled to be working with Eddie Hearn, he’s bringing boxing at the highest level out here – there’s no sport like boxing, and we’re showcasing it in Boston.

“We’re going to be in shape to do 12 rounds, I know I have the bigger dog inside me than Billy Joe, and I’m going to unleash that on him on October 20.”

“It’s been a long time coming for me to fight as a World champion. October 20, we’re coming to bring the pain. The last time I fought in Boston I fought Emanuel Gonzalez in June 2014 and it changed my life.

“I don’t know much about James but you don’t get to this level for no reason and I know he’s going to come to fight and try to beat Tevin Farmer. I’ve been one of the hottest fighters over the last few years, to beat me, he’s going to need to bring a knife and a gun because it’s not going to be easy – he needs to make sure he brings his A-game.”

“It’s amazing to be involved in such a huge bill in a great city like Boston – and it’s going to be even better when I leave with the IBF World title.”

“It’s great to be here, I love this city and it’s going to be like a homecoming fight for me with all the Irish fans living here. I want to thank Cindy for taking this fight, these are the types of fights that I absolutely relish, it’s going to be a really exciting clash alongside some brilliant fighters on the rest of the bill, I can’t wait.”

“Katie is a tremendous fighter and a hard worker so I know it’s going to be a hard fight, but a great fight. I am a great fighter too and not only can we both fight, we look good doing it – and we’re going to prove that on October.

“We’re not here to play marbles, we’re here to take over. I’m over here to hurt this man, real bad. Me and Billy Joe Saunders are not joking – we’re coming to get big wins and in style.

“It’s great to be on this huge bill alongside my big brother Demetrius Andrade and a lot of great fighters. I work very hard in the gym and I belong on the big stage, I promise you that after October 20, Toka Kahn Cleary is going to be fighting for a World title.”