/** * The header for our theme. * * Displays all of the section and everything up till
* * @package pandrah */ ?> Daniel Jacobs and Sergiy Derevyanchenko clash for IBF World Middleweight Title – The Pugilist 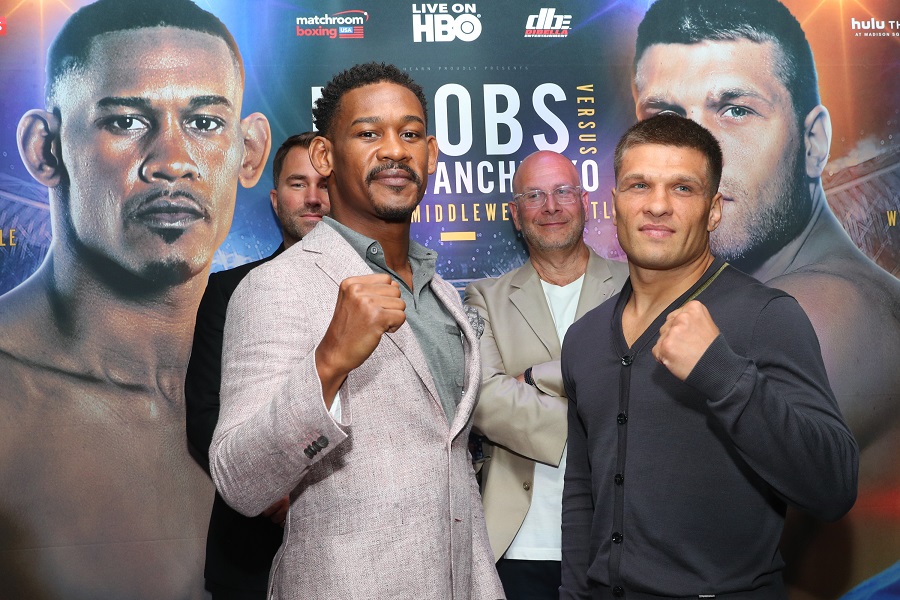 Saturday, October 27 at Hulu Theater from

Daniel Jacobs (34-2, 29 KOs) and Sergiy Derevyanchenko (12-0, 10 KOs) will clash for the vacant IBF World Middleweight Title and Alberto Machado (20-0, 16 KOs) will defend his WBA Super Featherweight Title against Yuandale Evans (20-1, 14 KOs on Saturday, October 27 at the Hulu Theater from Madison Square Garden in New York. The doubleheader will be televised live on HBO World Championship Boxing beginning at 10:00 p.m. ET/PT.

Jacobs, fighting out of Brooklyn, N.Y., is in hot form having taken the unbeaten records of Luis Arias and Maciej Sulecki in his last two outings at the Nassau Coliseum, Long Island and Barclays Center, Brooklyn respectively, punctuating his win over Sulecki with a knockdown in the final session.

The ‘Miracle Man’ is gunning to regain his world champion status having lost his WBA crown to Kazakh star Gennady Golovkin in a tight unification tussle in March 2017 in New York, and with Golovkin and Mexican hero Saul ‘Canelo’ Alvarez meeting in a rematch in September, Jacobs is hunting down the winner.

Derevyanchenko has his own designs on those blockbuster nights though. Born in Feodosia, Crimea, Ukraine, and now based in Brooklyn, NY, Derevyanchenko was a touted amateur, compiling an astonishing record of 390-20, as well as a 23-1 ledger in the World Series of Boxing, and representing Ukraine in the 2008 Olympics, before turning pro in July 2014. Known as “The Technician,” Derevyanchenko is fundamentally sound with superb reflexes, deft defense and devastating power, having stopped 10 of his 12 professional opponents thus far.

In a final IBF eliminator for mandatory status, Derevyanchenko proved he could carry his power into the later rounds, halting Tureano Johnson in the 12th and final frame of their August 2017 clash. One year earlier, Derevyanchenko knocked out former world champion Sam Soliman, becoming only the second man to do so, inside two rounds in July 2016, in an IBF elimination bout for the #2 ranking. While awaiting his title shot, Derevyanchenko dusted off the experienced Dashon Johnson in six stanzas in his last bout on March 3. Co-promoted by DiBella Entertainment and Fight Promotions Inc., Derevyanchenko is thrilled that his shot at coronation will take place in his debut at Madison Square Garden, the Mecca of Boxing.

Jacobs and Derevyanchenko are familiar foes as they both hone their skills with trainer Andre Rozier, who will be in Jacobs’ corner and camp for the bout, but Brooklyn hero Jacobs doesn’t believe that will play a part in their clash – and predicts a triumphant return to World champion status in a tough fight. Gary Stark Sr. will take over head trainer responsibilities for Derevyanchenko as he prepares for his first world championship opportunity.

Jacobs vs. Derevyanchenko will top a stacked bill in New York as the main event of a world title double-header. In the co-main event, unbeaten Puerto Rican star Alberto “El Explosivo” Machado makes the second defense of his WBA World Super Featherweight title against Cleveland’s Yuandale Evans in a 12-round fight presented by Golden Boy Promotions in association with Miguel Cotto Promotions and DiBella Entertainment.

Topping the non-televised bill is a rematch of the 2016 women’s fight of the year as Heather Hardy (21-0, 4 KOs) and Shelly Vincent (23-1, 1 KO) renew their rivalry, with the vacant WBO World Featherweight strap on the line after Hardy edged their fantastic first meeting.

“I’m excited to be back in New York City fighting in my hometown,” said Jacobs. “This opportunity for a world title is one I don’t take lightly and I’m preparing myself to be in an incredible fight with Sergey Derevyanchenko. I’ve always felt that I was the best middleweight in the world with this type of fight I’m that much closer to all the that glory and to proving to the world I am the best ”

“I’m a step away from my dream and I will not miss this chance,” said Derevyanchenko. “From my time in the amateurs to my pro career, this has been a long time coming for me. I’ve beaten everyone they’ve put in front of me to earn this shot. Having trained with Danny, I know him very well and we are friends. However, it will be strictly business in the ring. I will not be denied. The belt will be mine.”

“I feel excited to make the second defense of my title, but this time before all of my Puerto Rican brothers in New York,” said Machado. “I’m anxious to get to Los Angeles to start the strong stages of preparation and solidify myself as a champion for the second time with a convincing win for all of Puerto Rico. Thank you to HBO for believing in me. Thank you to Peter Nelson, Miguel Cotto Promotions and Golden Boy Promotions. Yuandale Evans is a great fighter who comes with a lot of hunger after years of rest. But this time I will go into the ring with extra motivation to reward all my people in person and those watching at home with a great victory.”

“I want to let Machado know that I am taking the belt home,” said Evans. “Training has been going great and I’ve been doing my homework. Machado is tall and strong, but he’s never fought a guy like me, who can hit like me. To fight for a world title at Madison Square Garden is a dream come true. I am going make the most out of this opportunity. This is my time to shine.”

“One of the saddest things is that in 2016, Shelly and I put on the fight of the year, and so many people missed it,” said Hardy. “We’ve been dying to do the rematch but under the right circumstances. This is a great time for women’s boxing and a great event to showcase the rematch – and I’m going to bring home that title, don’t worry about that.”

“This time, you are going to see the old ‘Shelito’ – I’ve got more than just three weeks to get ready, and I think it’ll be a repeat of the first fight, non-stop punching, and my hands are going to be all over Heather Hardy like she’s my woman and I’m not leaving without that title.”

“When we started working with Danny, the goal was always to become World Champion and now the time has come,” said Jacobs’ promoter Eddie Hearn. “This is brilliant match up but I strongly believe on October 27 at MSG Danny will be crowned champion and add another chapter to this Cinderella story.

“It’s a powerful triple-header with unbeaten WBA Super-Featherweight champion Alberto Machado defending his crown against Cleveland contender Yuandale ‘Money Shot’ Evans and New York’s own Heather Hardy meeting Shelly Vincent in a rematch of their 2016 Fight if the Year, with the WBO World Featherweight crown on the line. October 27 will be an electric night in New York.”

“With over 400 amateur bouts, a trip to the Olympics, and experience in the World Series of Boxing, Sergiy was adamant with me that he wanted to fight for a world title against the biggest name available,” said Lou DiBella, President of DiBella Entertainment.

“I’ve known Danny since he was a kid. He is a great fighter in and out of the ring. Stylistically, this is a can’t-miss action fight. Sergiy studies his opponents, finds their weaknesses, then breaks them down. That is why he has such a great chance to win this fight and become the IBF Middleweight Champion.

“Yuandale Evans has a tremendous opportunity in the co-feature to capture his first world title against champion Alberto Machado. Coming off the biggest win of his career, Evans is highly motivated to seize the moment and perform at his best. Both Machado and Evans can bang and like to brawl, so this should make for a very entertaining opening bout on HBO.

“Finally, Heather ‘The Heat’ Hardy and Shelly ‘Shelito’s Way’ Vincent will get the chance to rematch their 2016 Female Fight of the Year. The first fight was a barnburner, and this promises to be nothing less. The stakes are higher this time, as both women will compete for the WBO Featherweight Championship of the World. A World Championship in boxing has been a lifelong dream for both, and I am thrilled that they will get this opportunity on October 27.”

“Alberto Machado is determined to prove that he is the best super featherweight in the world,” said Oscar De La Hoya, Chairman and CEO of Golden Boy Promotions. “He beat a strong champion in Jezreel Corrales and defended his crown against a tough contender in Rafael Mensah. In both fight, he used his skills and power to obtain the victory, and I’m positive he will do the same against Evans before legion of Puerto Rican fans in New York. I have no doubts he will be recognized as one of the best champions that Puerto Rico has produced.”

“Alberto Machado is building his own legacy fight after fight,” said Miguel Cotto, President of Miguel Cotto Promotions. “He wants to be the best in his division and is hungry for the big challenges. He has the best opportunity to showcase his skills in front of his Puerto Rican brothers at The Garden in New York.”