/** * The header for our theme. * * Displays all of the section and everything up till
* * @package pandrah */ ?> KHAN VS. VARGAS PRESS CONFERENCE QUOTES – The Pugilist 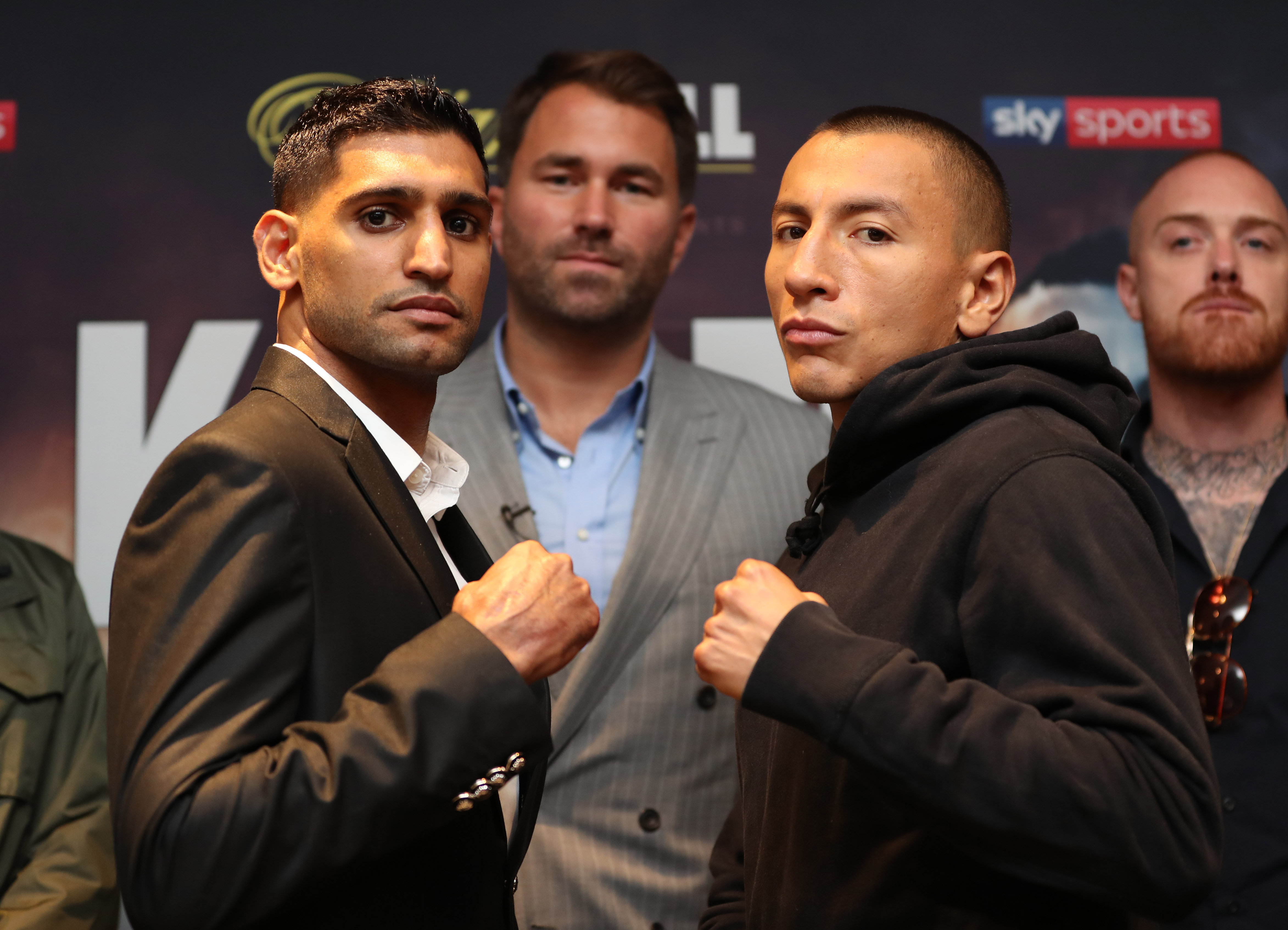 “It’s fantastic to see Amir Khan back again after a blistering performance at the Echo Arena in Liverpool against Phil Lo Greco. We’re still catching our breath from that. But this time I think a much more serious challenge is in front of him that he has prepared for intensely with his new trainer Joe Goosen.

“Chief support is a fantastic rematch of the Fight of the Year contender between Jason Welborn and Tommy Langford. There’s some huge fights on the undercard, Ryan Kelly takes on Kelcie Ball for the Midlands Area Super-Welter title and there’s action elsewhere from Sam Eggington, Lewis Ritson, Gamal Yafai, Scott Fitzgerald any many more. We’ve got 13 fights on Saturday, the doors open at 4 o’clock and we’re going to be running right through to midnight. Thanks for turning out today, the weigh-in tomorrow will take place at the arena, be there, it’s a 2.00pm start. We look forward to a great fight between Amir and Samuel and a great night of boxing live on Sky Sports and DAZN.”

“It’s brilliant to be back isn’t it. A fantastic run through to autumn and winter. Boxing is so hot at the moment and what better place to start than here in Birmingham. It’s great to be back, it’s fantastic to have Amir Khan topping the bill. We didn’t get to see much of him in Liverpool, it was so quick against Phil Lo Greco. I’m sure we’ll have more from Samuel Vargas, who I know comes full of confidence and with a big team. It is great to see Chris Johnson back in Britain, it has been a few years.

“It’s a wonderful card, there’s so many fights on the bill. We’re going to be Facebook live from six o’clock on Saturday night and live on Sky Sports Action from seven o’clock. It’s a great showcase for all of the talent on this bill. There’s a great British title fight on the bill as Jason Welborn rematches with Tommy Langford, I’m really looking forward to that. There’s plenty to look forward to, I can’t wait.”

“The work is done. In the lead up to this fight all we have been talking about is Phil Lo Greco. I’m going to thank Phil on Sunday because I think everyone over here thinks we’re all the same in Toronto. The work has been put it, ultimately it comes down to Saturday. I know what we’ve done. They know what they think they’ve done. They don’t know us. We’ve got a few tricks up our sleeve. We’ve done everything we can. Come Sunday morning we’ll all be happy. We’re a young team that is growing and Sam is holding the torch right now.”

“We’re definitely not expecting another Phil Lo Greco fight, I’m very familiar with him as well. This man beside me to my right (Samuel Vargas) is a beast, works hard, wants it, needs it. I trained Sammy up until he was 13-0 and we parted ways. And now that we’re back together it’s like we never left. You’re not going to see the same Sammy Vargas, you’re going to see an animal in front of you. I nicknamed him ‘The Bull’ because that’s what he is. I expect a knockout, that’s the only way to win here.”

“We had a great camp last time, it was a short camp, we only had five weeks. We’ve had ten weeks for this camp and we brought in top sparring. I’ve prepared like this is the toughest fight that he’s ever going to be in. We’ve put in all the work. We’re prepared. Ultimately, you’re going to have to get in the ring with Amir Khan and we’re talking about an exceptional career and he’s in an exceptional spot right now. Good luck to the boys over there (points to Team Vargas) but I’ve got the real athlete in the ring on Saturday night and we’ve come here to do one thing and that’s to win.”

“It’s been a tough training camp. I’ve spent round about ten weeks in Los Angeles and it’s the first time that me and Joe have spent a full camp together. The last fight was a little bit of short training camp because of the change of trainers. We’re going to be ready for this fight and I’m glad the team on my left (Team Vargas) is talking and they’re confident. They’re making the fight more exciting.

“I’ve trained very hard for this fight as I do for all of my fights. I’ve sparred with some really tough fighters and fighters that are probably better than my opponent. When I get in the ring I’m going to give Birmingham a great fight and I’m going to do what I do best. We never go into a fight looking for a knockout, we never go into a fight throwing big bombs. If it happens it happens, if I see an opening I’m going to take it. I’ve been watching videos of Vargas, I’ve seen a few things in there but everyone if different in every fight.

“I know I’ve got everything it takes to win this fight. I’m not seeing Vargas as another Lo Greco. They might be from the same country but that doesn’t mean anything. I’ve trained like this is a World title fight because I know where this can take me.”

“I’ve had a great camp and I want to thank my team. I had a tremendous training camp and had a lot of rounds. I brought in sparring from Puerto Rico and the States as well as local sparring in Toronto. It was great. I’m blessed to be here.

“There’s no doubt in my mind that I will be victorious on Saturday night. I don’t care how I do it. I don’t care if it’s by knockout or if it goes the distance or if I break his ribs. I don’t care how it is, in my heart I think it, I dream it, I pray about it and I’ll win. I think Amir is an old man and he’s over the hill. I think he’s been damaged a lot and I know in my hear that when he goes to sleep he knows that if I touch him, he’s going to get hurt. If I clip him with something he will get hurt.”

“The Brandon Cook fight falling through was a massive disappointment. It was hard to get back into the gym so soon after it. My fight on Saturday was always planned, it was supposed to be a big fight but it is what it is. There’s some big fights in the pipeline that could change my career and my life in general. We’ll push on from this, we’ll get a good win and see what’s next.”

“I’m confident at the end of the day. I won the British title and I know that I can beat Tommy Langford again. I’ve trained even harder for this rematch. If I do what I did last time then I know that I’ll win. He’s got an excuse, he said that he didn’t prepare properly last time and he looked past me. He’s gone back to the drawing board, our side hasn’t. We’ve just got to turn up, get that win and do what I normally do. This is a brilliant bill here in Birmingham and it’s going to bring the best out of me. I’m ready to go 12 rounds at a solid pace, I’ve put my body through hell. He’s had his time, this is my time now. This is the end of Tommy Langford, I’m telling you straight.”

“It’s brilliant to have such a huge event back in Birmingham. It’s a great boxing city. It’s a chance for me to show what I’ve got. There’s huge exposure for all of the lads on the card and it’s going to be absolutely rammed out in the arena so I’m really looking forward to it.

“I made a lot of mistakes last time, I’ve been very open about that. I held my hands up, I completely overlooked Jason. I haven’t done that this time, I’ve given the respect and the training camp that he’s due. I’m looking forward to putting on a very good performance on Saturday.”

“I think it’s time to prove that last time out wasn’t a good night for me. I’ve been training really hard since that loss and it’s time to put things right. I’ve sold a load of tickets. There’s a lot of people coming down to support me on the night so I’m looking to box out my skin. I’ve got a game opponent in front of me in Kelcie Ball and I’m looking forward to doing a job.”

“I’ve had ten fights and now I’m getting into the big contests. This is a step up for me on Saturday. I’ll be concentrating on Craig Morris first of all and making sure I do a good job and get the win. Then we can look at the big fights that are in the pipeline. Craig is a game fighter who is coming to win. Maybe it will be the Anthony Fowler fight next. There’s a lot of big fights out there for me that can be made if I come through Saturday. The winner of me against Fowler could potentially face the winner of Ted Cheeseman vs. Asinia Byfield.”

“I’ve been working hard in the gym. It’s my third fight, I’m amazed I’m here right now. It’s my second Amir Khan undercard which is obviously a great experience. I’ve been staying in the gym, learning the trade. I wouldn’t say that my last two fights had that pro style but we’ve been working hard on it and I’m looking forward to showing everyone on Saturday night. I’m just getting better and better as the time goes on.”

“I need to get Saturday night out of the way and then we can look ahead to the bigger fights. I’m looking forward to getting out on Saturday and putting on a good performance for the Birmingham crowd. The defeat to Gavin McDonnell has made me hungrier, I messed up and I’m not going to mess up again. I want to show everyone what I’m capable of. I’m a lot better than what I’ve shown in my previous fights. I’m ready to go and to show everyone what I’m really about.:

“I’d just like to thank Matchroom again for getting me on the bill. Ryan has been here before, but he didn’t get the win. I don’t believe he is going to get the win this time. We’ve sparred numerous rounds and we know each other really well. I’m coming to win. I’m game as anything. I’ve had a good camp and I can’t wait to get in there and do the business. Ryan has had his shot before and it didn’t go to plan so if that happens for him again, he’s not really got anywhere to go. I’m just going up, I can’t wait to get it on.”