/** * The header for our theme. * * Displays all of the section and everything up till
* * @package pandrah */ ?> Kozin & Hernandez Draws For WBF World Title, Mendoza Mexican Champ. – The Pugilist 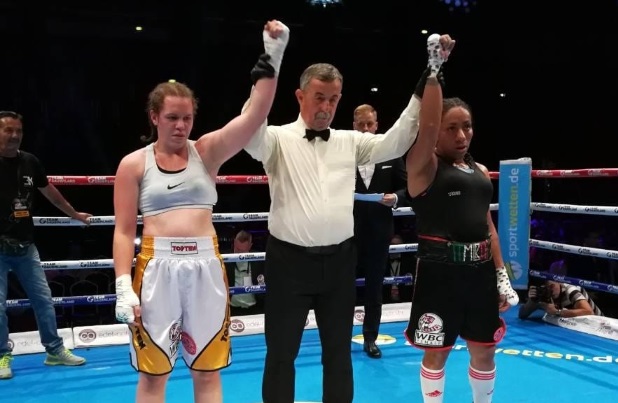 Ema Kozin from Slovenia failed to become a two-weight World Champion on Saturday night, September 8, at the Arena Zagreb in Zagreb, Croatia, when she fought to a draw against Mexican Irais Hernandez for the vacant World Boxing Federation (WBF) Womens World Super Middleweight title.

Still only nineteen years old, Kozin already held the WBF World Middleweight crown, a title she won last October and has since defended twice. In Hernandez she was facing an inexperienced but worthy co-challenger, who in her previous fight drew with WBC World Heavyweight titlist Alejandra Jimenez.

After ten rounds of entertaining action, judge Predrag Aleksic scored the fight by the narrowest of margins for Kozin, 96-95, while judge Juergen Langos scored it 97-93 for Hernandez. Judge Alexander Plumanns couldn’t separate the two, as his score was 95-95.

Two well-conditioned boxers gave each-other a very good battle, and kept a consistent pace the entire fight, with both having their moments. But, while many rounds where hard to score, Mendoza appeared to land more clean shots.

Judge Roman Cruz had the fight all even at 95-95, but he was overruled by judges Antonio Villegas and Carlos de la Rocha who scored it 96-94 and 98-92 for Mendoza. Referee in charge of the action was Juan Manuel Rincon.

Mendoza improved his record to 10-6-2 (3), while Andrade drops to 5-4-1 (3). Promoted by Borizteca Boxing Promotions, the fight was streamed live world-wide by Fight Hub TV.