/** * The header for our theme. * * Displays all of the section and everything up till
* * @package pandrah */ ?> RYDER MEETS SIROTKIN IN WORLD TITLE FINAL ELIMINATOR AND CHEESEMAN CLASHES WITH BYFIELD FOR LONSDALE BELT – The Pugilist 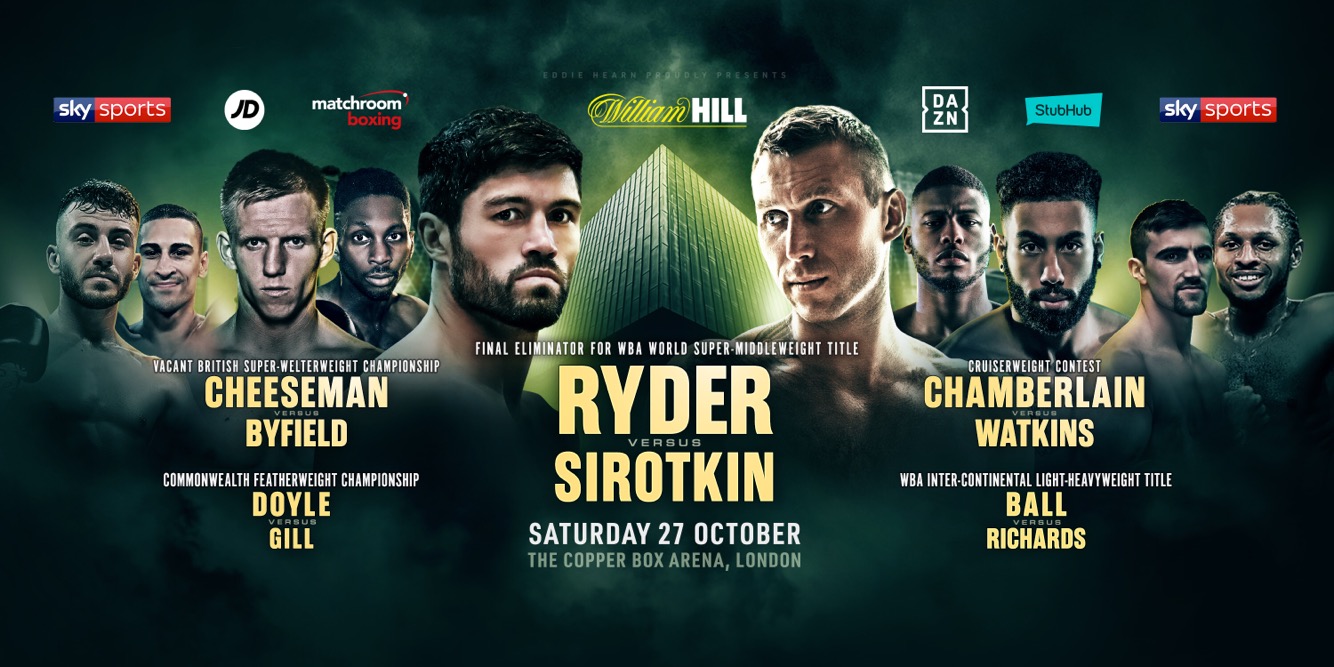 John Ryder faces Andrey Sirotkin in a Final Eliminator for the WBA Super-Middleweight World title at the Copper Box Arena in London on October 27, live on Sky Sports and DAZN in the US.

Islington’s Ryder is back in action following his stunning two-round destruction of Jamie Cox on the Bellew vs. Haye 2 undercard at The O2 in May.

It was another explosive statement from ‘The Gorilla’ following his brilliant win over Patrick Nielsen inside five rounds, and now he finds himself just one win away from a dream World title shot.

Russia’s Sirotkin, the current WBA Inter-Continental Champion, sits two places behind Ryder in the rankings at number 5 and is unbeaten in all 15 of his contests, picking up a number of ranking titles from the WBC and WBO along the way.

“It’s great to be boxing back on Sky Sports again and to be headlining in my home town is a proud moment for me,” said Ryder. “That’s going to spur me on to get the win and put me in contention to fight for a World title.

“This is such a big fight for me, I’ve had to be patient off the back of two big wins, but things have fallen in to place now and I’m fully focused. The winner goes on from here and it’s a long, hard road back for the loser.”

Main event on October 27 will be supported by one of the best trade cards of the year.

Ted Cheeseman and Asinia Byfield battle it out for the Vacant British Super-Welterweight title in one of the most highly-anticipated domestic matchups of the year.

‘The Big Cheese’ has been making a name for himself in the 154lbs division with notable wins over Carson Jones and most recently Paul Upton. A fight with rising star Anthony Fowler could await for the winner of the Lord Lonsdale belt.

Ryan Doyle looks to build on his shock win over Reece Bellotti as he defends his Commonwealth Featherweight belt against the talented and undefeated Jordan Gill.

Doyle hit the big time when he stopped Bellotti after five epic rounds at York Hall in June and isn’t wasting anytime as he jumps straight into another banger with Dave Coldwell’s 21-0 prospect.

“This is a wonderful night of boxing – Five 50-50 televised fights, it’s going to be a banger,” said Eddie Hearn. “John Ryder has a great chance to earn his shot at the World title and Cheeseman vs. Byfield could be domestic Fight of the Year. Doyle vs. Gill, Chamberlain vs. Watkins and Ball vs. Richards are all ‘pick-ems’. Fans on Sky Sports, DAZN and in the arena are in for a great night on October 27.”