/** * The header for our theme. * * Displays all of the section and everything up till
* * @package pandrah */ ?> OLEKSANDR USYK VS. TONY BELLEW PRESS CONFERENCE QUOTES – The Pugilist 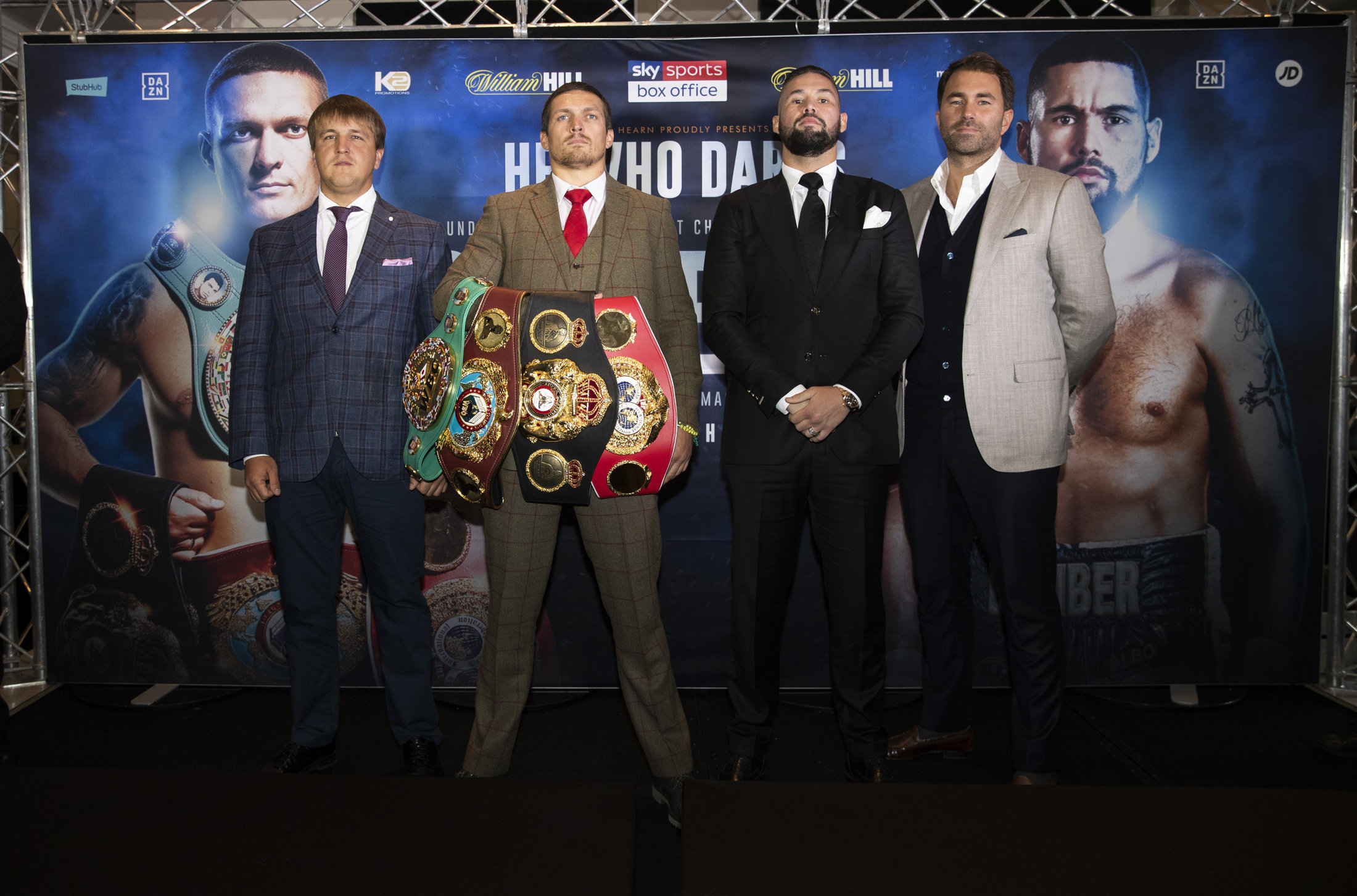 “Good afternoon everyone and welcome to Manchester. The big fights just keep on coming after a fantastic weekend at Wembley Stadium in front of 80,000 people where Anthony Joshua defended his World titles in a brilliant fight against Alexander Povetkin. We bring you now what I believe is fight of the year, Tony Bellew challenging Oleksandr Usyk for the WBO, WBA, IBF, WBC and Ring Magazine World Championship titles – the first ever four belt undisputed fight ever in British boxing history and a massive event on November 10, live on Sky Sports Box Office in the UK and DAZN across America as well. We have a huge night of boxing planned and already very few tickets left, we went on sale at midday today. There’s British Championship fights on the card between Ryan Walsh and Isaac Lowe, Scotty Cardle challenging Joe Cordina and Anthony Crolla here today will be in a Final Eliminator for the WBA title against Daud Yordan, back in the arena that has seen him in so many great fights. Josh Kelly will be on the card defending his WBA International title as well.”

“It was another magnificent occasion at Wembley Stadium on Saturday night in front of 80,000 people. I’ve got to pinch myself a little bit, being amongst not only Tony Bellew today, but Oleksandr Usyk and Vasyl Lomachenko – pound for pound greats. This is a fantastic era, it’s wonderful that these guys are giving us the best entertainment in the ring and we never forget that the fighters are what matters most. When Eddie told me about this matchup I had to sit down, Tony is going in after the double over David Haye and I’ve admired Oleksadnr Usyk for some years now.”

“Good afternoon everyone, thank you England for once again welcoming the WBA. To have Tony Bellew fighting for one of the WBA World titles against one of the best boxers in the sport right now and a pound-for-pound star is great. The fight will be very interesting. We are always looking to put on the best fights for the fans. It’s also an honour to have Antony Crolla fighting in an eliminator for the WBA World title. It’s going to be a great night of boxing and I’m really pleased this is happening in England.”

“It’s a great pleasure being here introducing such a great event on November 10. First of all, I would like to give huge credit to Eddie and his partners Sky Sports for the job they have done in recent years, giving new life to British boxing and boxing in the whole World. I hope our cooperation will not just be within one fight or two fights, but we will be able to bring some top-level events to Britain, Ukraine and the rest of the World. I would like to say some pleasant words to the true warrior, the lion heart that we respect so much, Tony Bellew. He proved many times that being an underdog does not mean being a loser. Of course, I will be supporting Usyk on November 10, but I want to wish Tony good luck and a successful training camp. Usyk is just extraordinary, he’s one in a million. Together we have accomplished every boxers’ dream within just 15 fights. In five years we collected all of the belts in the division. Now we are here in the native land of boxing. This matchup is something the World was waiting for, the winner will get all of these amazing belts and probably book a place in the boxing Hall of Fame. This is history in the making.”

“I’m very proud to represent the best Cruiserweight in the division right now. I can say that for sure it is going to be a very tough fight. It’s not going to be an easy walk in the park. As we know, Tony is a very good fighter. Both of these guys want a challenge. Oleksandr doesn’t just want to defend his belts, he wants a challenge, just like Tony did during his age. He was the best Cruiserweight and there was nobody left for him to fight so he stepped into the Heavyweight division, that says a lot. Now that he has a challenge, he says ‘screw it, I’m coming down, I want a challenge and I want those belts’. That’s why I think this is going to be a very good bout.”

“It’s a huge fight and I think mine and Daud Yordan’s styles will gel nicely, it’s going to be a great fight. There’s a lot of people going on about me being on the undercard for the first time in a while, but I’m honoured to be on the card with two fantastic fighters, I go way back with Tony Bellew. I’m just happy to be back in Manchester. It’s been a bit of a slow year with injuries and stuff, but I believe I’m better than ever. In the gym I’m improving and I’m looking forward to being back. I’d never be disrespectful and call Vasyl Lomachenko out but if he ever wants to fight in England and if I win on November 10 then there’s a good chance that fight happens, I’d love to get in the ring with him, he’s a fantastic fighter and one of the best fighters on the planet. It’s something that I’d look forward to, of course.”

“It’s something that I look at as a once in a lifetime opportunity. I’m fortunate enough to have worked with Tony for a number of years and for me, to have the kind of fighter that he is and to have taken the fights that he has, that’s once in a lifetime stuff. To cap it off with an undisputed Cruiserweight World title fight is as big as it gets, it’s for all of the marbles, it’s the pinnacle.

“I wanted him to retire and walk away after the last David Haye fight. I saw Usyk call Tony’s name straight after winning the World Super Series during his interview in the ring and I thought ‘oh sh*t we’re going again’. I just knew, I didn’t have to text him or anything, I just knew it was a fight that was going to happen. So, we’re here and it’s a massive challenge but it’s only fitting. He’s a man that everyone loves to give zero chance. Now he’s showing his metal, his heart and his determination because there’s something there that he wants and he’s going to put it all on the line once more, we can’t wait.”

“I’m sure it won’t be an easy fight for me and I’m really glad to come back to England, the country which gave me a chance to get some trophies already, that mean a lot in my life. I’m not thinking about Tony Bellew at this moment, I’m just concentrating on my training camp and thinking about how I will overcome all of the challenges ahead of me before the fight. I’m not a monster, I’m a white rabbit. I picked Tony Bellew because he is the man that takes the biggest challenges. He is not the usual type of fighter that will come, see how hard it is and quit. He will come to fight until the end. These are the kind of fights that the World wants to see.”

“Everyone asks why. I was on my honeymoon and for one reason or another I was stood there watching Oleksandr beat-up Murat Gassiev on a mobile phone. The fight stops, and then he makes the ultimate sin and he says my name, and it didn’t take long. As soon as he said my name I knew. When I was watching the phone, I knew.

“The World’s going to write me off, and the more you write me off the more I want to fight. We will see. I’m going up against the monster, the man who nobody really wants to fight. The man who just dismantles fighters and beats them easily. Make no mistake, he’s looking past me already. He might say he’s not, but he’s already asking Eddie ‘who am I going to fight at Heavyweight’. He thinks I’m arrogant. It is not arrogance that he sees, for the first time in his whole career he sees a man looking back at him that believes he can win, and not a man that believes he’s just going to lose. I don’t just think or believe, I know. I’m going to find a way, I always do. You will have to nail me to the floor, you will have to nail me to the floor to keep me there.

“I’ve got no disrespectful things to say to him, he’s an amazing Champion. On November 10 he’s going to learn that I bring something different to everyone else. I have the one thing that he doesn’t have, and that’s a punch that can switch lights off within the blink of an eye. One wrong step or one wrong manoeuvre, and it’s over. Every time that I’m wrote off I always find a way and on November 10 it’s going to be no different.”