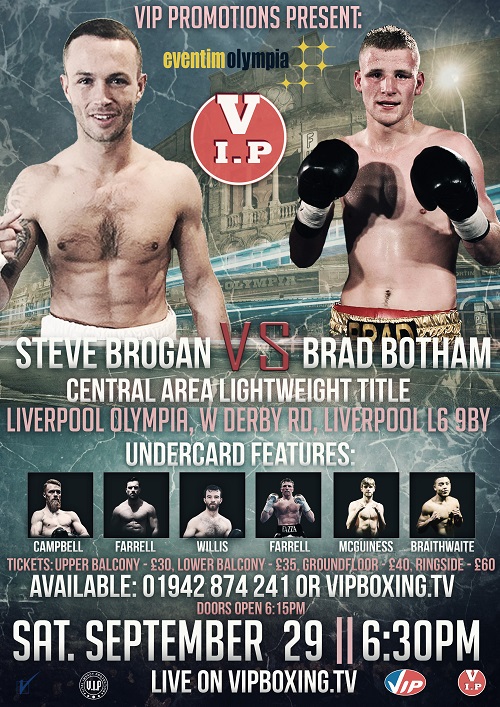 Steve Brogan, 12-1-2 (2), tops the bill at the Liverpool Olympia on Saturday September 29, live on vipboxing.tv. The fighter from Skelmersdale will contest the vacant Central Area Lightweight Title against late replacement Brad ‘Beefy’ Botham, 5-5-1 (1), after the withdrawal of original opponent, Shakeeb Ali.

Despite the change, Brogan says he isn’t fazed. The 34-year-old recently chatted to VIP TV and explained how – if victorious – he is hoping the belt will be the springboard onto bigger titles.

“He’s not a journeyman; he’s coming to win the title,” said Brogan. “I’ve seen a couple of his fights. He looks a good kid, comes forward and had been in a couple of Central Area Title fights before. So, he’s got the experience. He’s good, he fights in the pocket and I’m looking forward to it. I’m grateful to be topping the bill at The Olympia. It’s a proper fighting venue, and the undercard is great with loads of talent on.”

“There’s always a great atmosphere at the Olympia,” said promoter, Steve Wood. “This will be a good fight and, despite Botham getting the opportunity late, that could work in his favour because there’s no pressure on him. We’ve had Botham on our shows before and he will definitely give Steve a very good test. So, this headliner will make for good viewing for the fans, and we’ve got an entertaining undercard too featuring local fighters including Tom Farrell, and Luke Willis.”