/** * The header for our theme. * * Displays all of the section and everything up till
* * @package pandrah */ ?> WARRINGTON VS FRAMPTON LEEDS PRESS CONFERENCE QUOTES – The Pugilist 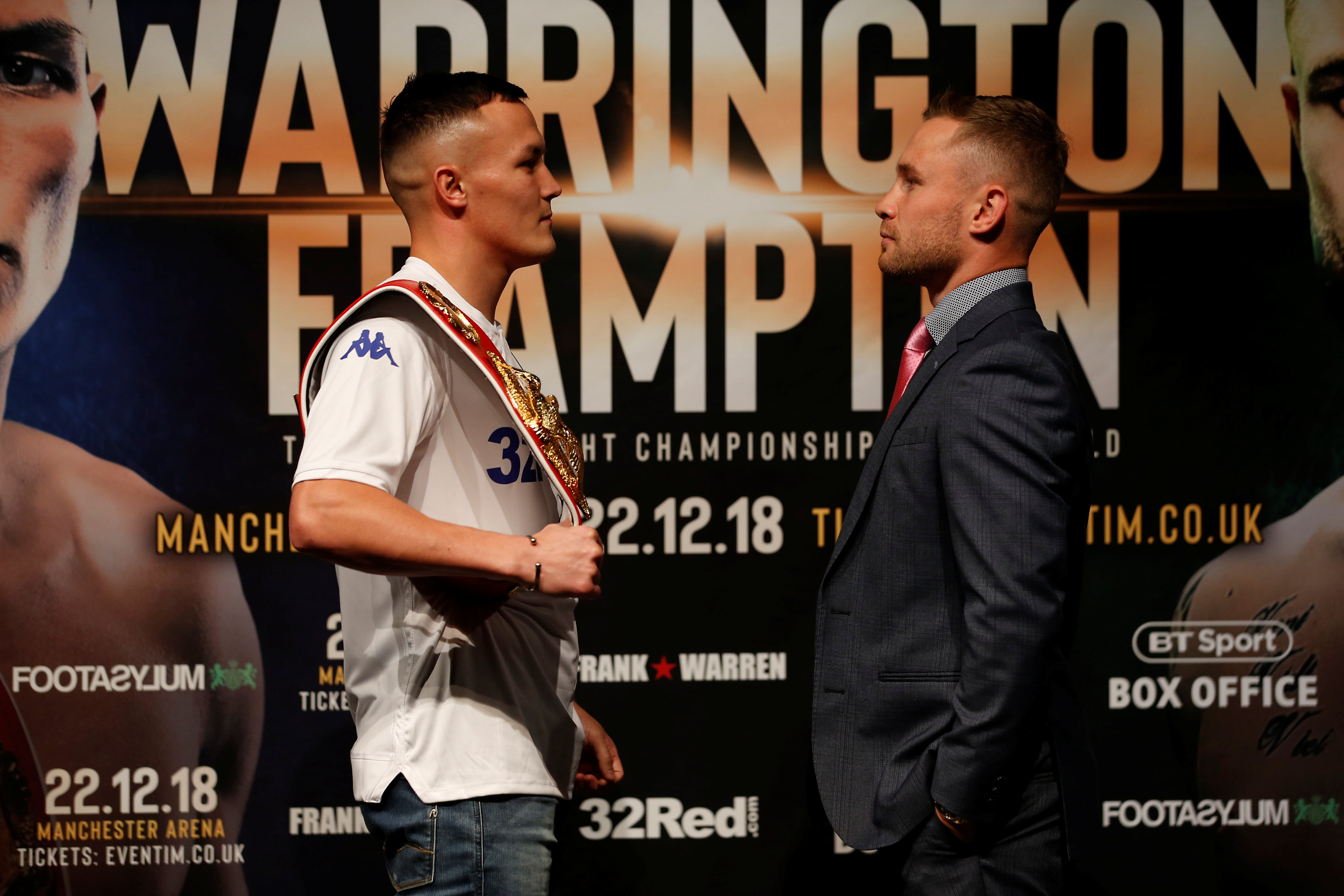 IBF featherweight champion Josh Warrington and his challenger Carl Frampton faced off on the second leg of their press tour.

They meet in a stunning match at the Manchester Arena on Saturday December 22, live and exclusive on BT Sport Box Office.

Here are a selection of quotes from today’s presser.

There could be easier fights, but I want the best in the division.

It is going to be deafening in Manchester and we have the Fight of the Year.

It is two fighters having it out, but I will still be world champion at the end of the year.

I won the English and Commonwealth title on the road and going to Manchester where its neutral is no bother. I think the support will be even.

Champion of the world has a lovely sound, but it’s just a title and I believe I can strive for more.

I watched Carl and I see things I can exploit and do things on the night to beat him.

We will come up with three or four game plans and I will adapt.

When the first bell goes respect goes out of the window and we will punch each others head in.

This fight doesn’t need animosity. If I started acting like a bell*** it would be out of character.

I did against Lee Selby because there was bad feeling between us and the teams. Things got nasty.

I always knew we had the beating of Lee Selby. The media made him up to be something he wasn’t.

This is a different ball game and a harder fight, but one we’re looking forward to.

When he beat Lee I just whispered, ‘Can we discuss my bonus?’ I’m still waiting so I’ll be having a tenner on Carl.

There is a lot of pay-per-view fights and this the best of the lot. It is a proper fight. Two lads who wont allow themselves to lose.

If I win this fight it will mean more than any of my world title wins, because I have been written off.

I want to stick my fingers up to those who wrote me off after the Leo Santa Cruz loss.

People say I’m on slide but since teaming up with trainer Jamie Moore, promoter Frank Warren and MTK these are my prime years.

Josh thinks I’m not what I was and a lot of people think that after the Santa Cruz loss and a short camp for my fight against Horacio Garcia.

In my last two fights I’ve been as good as ever. If Josh wants to think I’m a shadow of my former self he can.

I am not daft and I know what it will be like on the night. It just going to be noise and I will use to my advantage.

Look back at interviews I was doing six years ago and I was counting the days to retirement. It was a job, but now I look forward to the gym.

I wasn’t enjoying it and still beating good fighters. That says a lot about me.

I expect this to be a tough fight and I need to be right physically and mentally.

For the Scott Quigg fight I did 220 rounds of sparring against bigger men, but Jamie has cut that in half and work on tactics and think that was a brilliant session after.

I may need the performance of my life and there isn’t an ounce of quit in either of us. It will be a case of toughening it out.

I will suss him out and work out game plans as the fight goes on.

I don’t have to hate Josh. I like him, but it is a fight and we will do whatever we can to win the fight and shake hands afterwards.

Things will be said in the build-up that will irk each other, but it happens and the only opponent I ever hated was Chris Avalos.

Carl does things that come natural like footwork and anticipation. There is a difference between elite and world class fighters. Carl is elite.

I wouldn’t want to change him in a big way because he was already phenomenal. It is more about decision making and setting tactics. This fight will come down to tactics.

I know nobody will beat Josh without being in a very tough fight, but I feel I have a very talented fighter in Carl.

Josh proved how good he was against Lee Selby and he is more than a pressure fighter. His work-rate will give anybody problems.

Tickets are now on sale for this blockbuster event at the Manchester Arena on December 22nd and are are available to purchase via Ticketmaster and Eventim.