/** * The header for our theme. * * Displays all of the section and everything up till
* * @package pandrah */ ?> WILDER V FURY: PRESS CONFERENCE QUOTES – The Pugilist 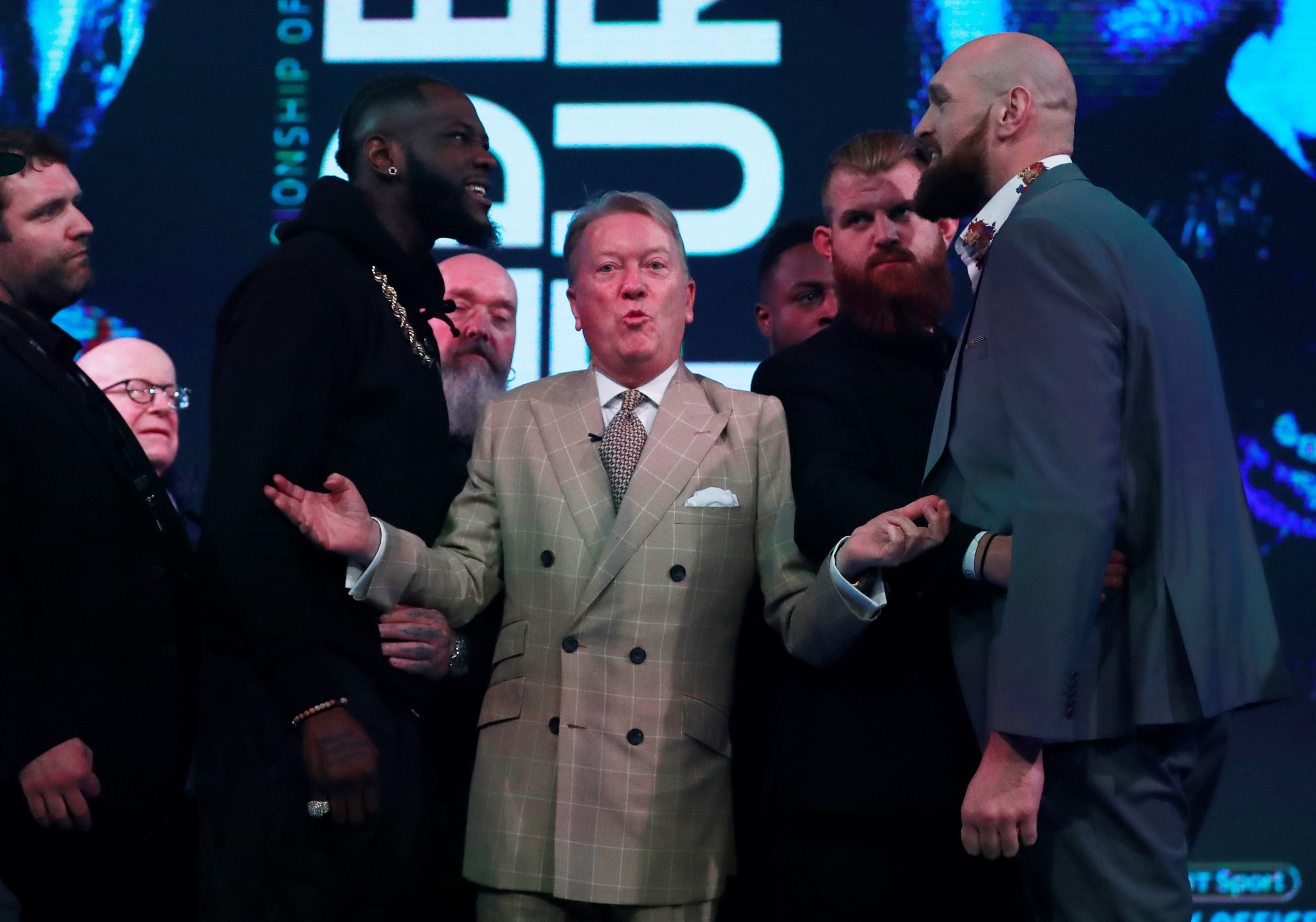 Today in Stratford marked the first stop on the three-city media tour to officially launch the promotion of the heavyweight championship of the world contest between the lineal champion Tyson Fury and the WBC ruler Deontay Wilder, which will take place on December 1 at the Staples Center in Los Angeles.

A little correction for you. I am no challenger to no man, I am the lineal heavyweight champion of the world. That means I am the best of the best, the elite champion. This is two champions colliding, I am challenging for nothing or nobody, this is equal rights champion vs champion.

I am savouring nothing here. The only thing I am savouring is smashing Deontay Wilder’s teeth in, that’s it. I’ve come here today and all the press has turned up, the world’s press is here – Showtime, BT Sport, UK and American press.

They are here to see the biggest fight of our generation between two undefeated giants. And boy are you going to get a fight. You are in for a real treat, don’t worry about that.

Because I am in the mood for no messing and no running around rings and dancing from nobody. There is not a 15st man on the planet that can beat Tyson Fury and I will stand and prove what I will do to this idiot. I will punch his face right in for him, not a problem, seven days a week and twice on a Sunday.

If we fought 30 times I’d win 30 times. That’s how confident I am of beating Deontay Wilder. No problem.
For all your knockout power, ten men in the ring on the night wouldn’t beat Tyson Fury.

I have looked into a killer’s eyes and I am looking at a pussy cat, not a killer.

Deontay Wilder
It is very important for me to establish dominance. I say so many things in this sport, I say I am the best, I say I hit the hardest and that I am the baddest man on the planet. And I believe every word that I say.

When I say I’m going to knock a man down it comes to pass. So when it comes to Tyson Fury I am all about devastating knockouts, that’s what I do. There is no pressure on me to do anything because I know what I’m going to do.

You’ve just got to be there to witness it. He’s got two months to get ready and he has already lost a lot of weight and has to lose a little bit more. He knows he’s gonna get knocked out. He can hoop, he can holla, he can build himself up and build confidence.

He needs to meditate on his situation because he will feel pain he’s never felt before. I can’t wait, ya’ll know when it is time to come and see a Deontay Wilder fight and you’re only coming to see one thing, me knocking somebody out.
The 41st person to be knocked out is the man you are looking at right here.

It is not rocket science making the fight and the young man to my left here (Shelly Finkel) spent a lot of time working on another fight with a guy from your country who didn’t want to fight. There was an opportunity when this man got back, cleared himself up and got into the shape he’s in, Shelly and Frank made this fight very quickly.

When two great champions want to fight, the fight happens and that is why December 1 is happening. When the Bronze Bomber fights the Gypsy King, the lineal champion fights the hardest punching heavyweight in the world, the WBC champion, we’re going to know then and there who the best heavyweight on the planet is, until proven otherwise.

The winner of this fight on December 1 will be the best heavyweight on the planet.

I have nothing but respect for the lineal champion who, when I was handling Klitschko, I did not think he had a chance. He proved me wrong. He is not going to prove me wrong twice and that will be shown on December 1 when Deontay takes care of business.

We didn’t pick the fight because we believe it is easy, we believe Tyson is the best out there. That is why we want to fight the best and only the best. We have nothing but respect because your countryman didn’t have the guts to step up like you do.

The fight is happening, contrary to what some people are saying, and it is the two best, the best because they are willing to step in the ring together. That is what great fighters do, the lineal champion fighting the WBC champion, both undefeated and we are going to see something special on December 1.

I think it will be a fight that nobody expects. This is not going to be cat and mouse; this is going to be a war. As soon as that bell goes we will have a war. I know what this man brings to the ring and he has a fighter’s mentality.

You are going to see a special heavyweight fight, the best for a long, long time
Do not miss it, as a boxing fan you want to see this and you can buy it on BT Box Office and Showtime in the States. It is a fight you cannot afford to miss.