/** * The header for our theme. * * Displays all of the section and everything up till
* * @package pandrah */ ?> David Haye Signs Old Foe Dereck Chisora – The Pugilist 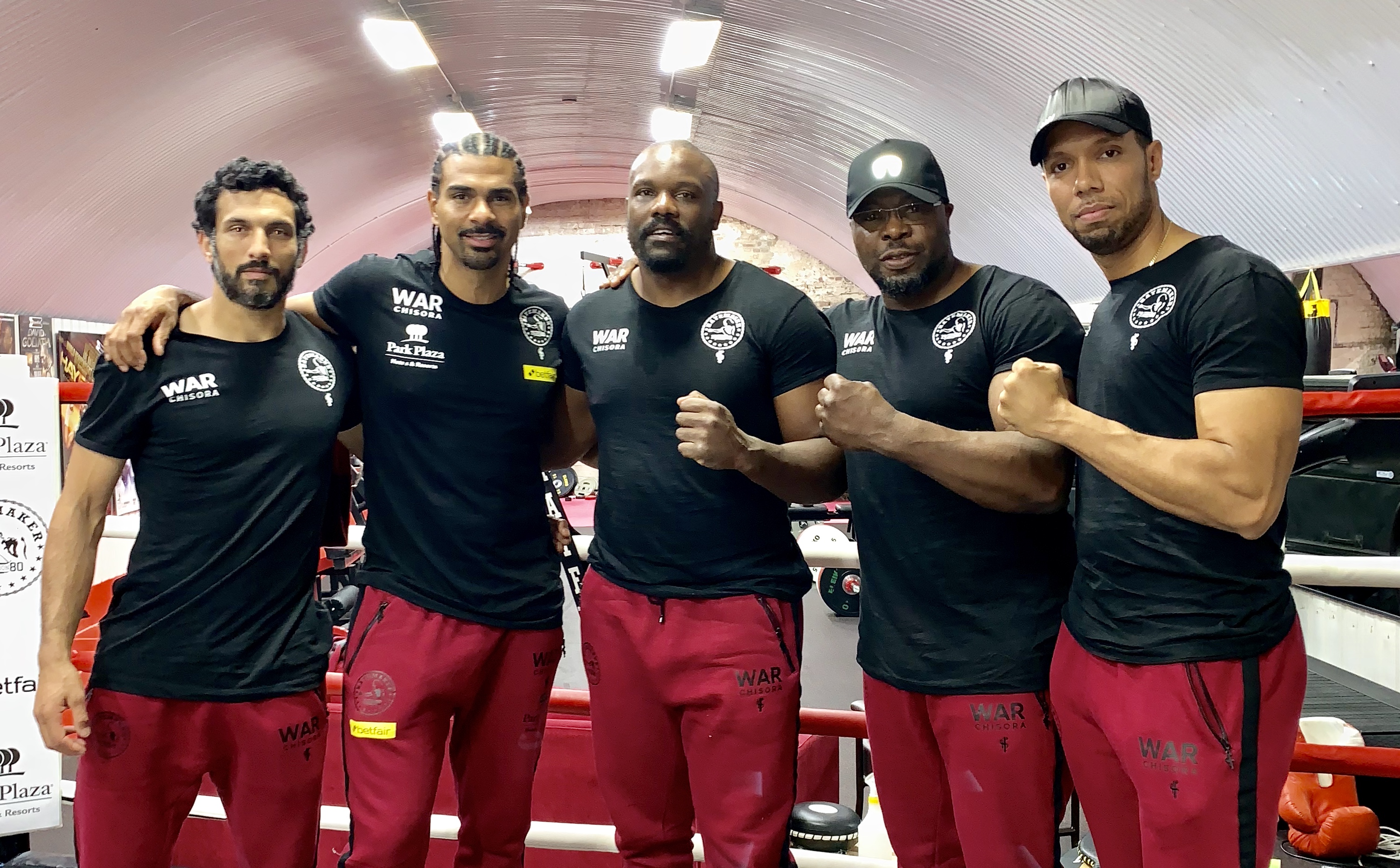 This morning, Wednesday 17TH October 2018, David Haye, in a move that no one will have seen coming has officially signed an exclusive management deal with none other than old foe, Dereck ‘WAR’ Chisora, who will join the Hayemaker boxing stable.

The duo have also confirmed ‘Del Boy’ is no more. Under Haye’s complete guidance, Derek has overhauled his approach to his professional career. With London his hometown currently proving to be the epicentre of heavyweight boxing, Derek ‘WAR’ Chisora finally means business, this is WAR.

The two share a colourful and well documented history which began on a night of mayhem in Munich back in 2012. Following Dereck’s 1st bid for world honours, which saw him go 12 rounds against Vitali Klitschko, tempers flared at the post fight press conference culminating in a huge brawl between the Haye and Chisora camps. Fists flew, camera tripods were wielded and threats were issued. The torch paper to one of British boxing’s most notable rivalries was well and truly lit.

5 months and a bitter build up later saw the two men standing in opposite corners of the ring in front of a packed out crowd of nearly 40,000 at Upton Park football stadium. Billed as ‘Licensed to Thrill’ the fight did not disappoint. Haye stopped Derek inside of 5 rounds, the beef was squashed and replaced with the type of respect forged between warriors in the heat of battle.

Fast forward 6 years and Haye has now called time on his own professional boxing career during which, he navigated his way to world honours under the Hayemaker banner, a promotional entity of which David is CEO, promoting and co-promoting all of his last 6 Pay-Per-View shows. Haye, still just 38 years old already has proven success as a boxer, promoter and manager.

Derek ‘WAR’ Chisora has been knocking on the door of world titles for many years. When fully fit his cast iron chin and non-stop pressure is a problem for any heavyweight on the planet. Since that night at Upton Park, Chisora has blown hot and cold going 14-4 in his last 18 fights. Of late he has been in some exciting fights, most notably against Dillian Whyte in a fight of the year barn burner at the end of 2016 and most recently against Carlos Takam. The notoriously tough Cameroonian was looking to re-establish his place as a world title challenger following a 10th round controversial stoppage loss against Anthony Joshua. Chisora v Takam took place on July 28TH 2018 and after a slow start Dereck began to find his single shots landing in the middle of the fight. Against the grain of the fight Chisora landed a brutal right hand in the 8th round which sent Takam to the floor, the home crowd erupted in support for the London man. Takam managed to rise only for Derek send him immediately back to the canvas with a similar punch signalling the end of the fight, 2 rounds quicker than AJ had done it. With a new found focus and dedication Dereck is gearing up for another world title bid and believes that Haye is the man to guide him over the line stating,

‘He is one of very few managers who has themselves won world titles, he knows what it is like to step in the ring putting everything, including your life, on the line. I am at a point in my career I know I cannot afford to make mistakes. ‘Del Boy’ is no more, I am not playing, I am not cutting corners or looking for the short cuts, I have realised I need to live the life of a professional if I am to achieve what I know I am capable of… there will be no more late nights partying, drinking, getting distracted by stuff that will simply move me away from my dream. David has already built on my existing team of Don Charles and John Ramos bringing in the best in the field of S&C, nutrition and rehabilitation to support them. To all heavyweights out there who think Derek Chisora has had his time, missed his moment, you’re wrong, this is just the beginning, this is WAR.”

‘Derek is an immense talent, a true warrior. His most recent win again Carlos Takam sent shock waves around the boxing community – myself included – and a stark message to his fellow heavyweights. When Derek is focused, when he gets the work done and has the infrastructure around him he requires to perform he is not a boxer you can under estimate. Derek is dangerous and after a professional career spanning over a decade he is looking to scale the heights of the division, capturing world titles and I am looking forward to helping him achieve this”

This newly formed alliance could never had been anticipated, but is set to facilitate fight nights to get fans excited. Derek ‘WAR’ Chisora means business.