/** * The header for our theme. * * Displays all of the section and everything up till
* * @package pandrah */ ?> Salam Sets Record Straight, Durodola WBF World Champion – The Pugilist 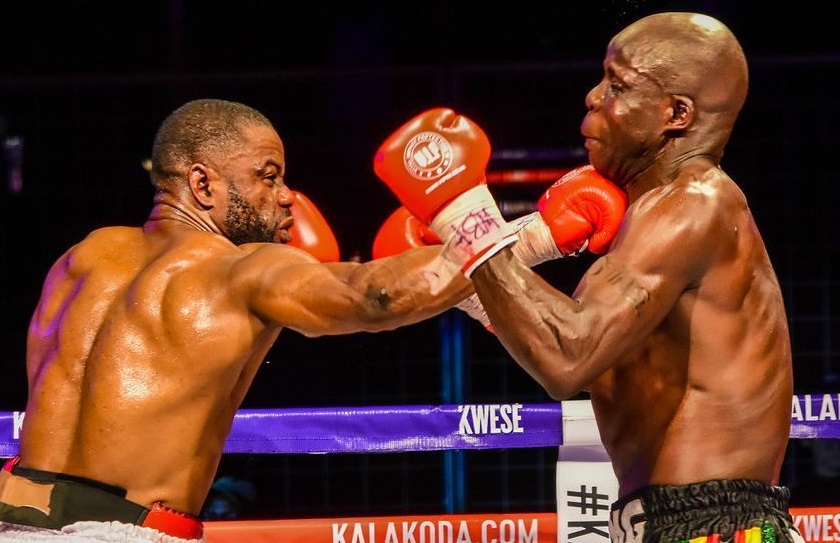 “Chaos in Lagos”, televised and streamed by Kwesé Sports, was headlined by a highly anticipated rematch for the WBF All Africa Cruiserweight title between defending champion Chamunorwa Gonorenda from Zimbabwe and local man Tony Salam.

“Sting” Gonorenda had won their first meeting, on home-ground in Harare on August 31, by controversial split decision, and Salam had publicly promised to not leave the result of the return fight in the hands of the judges.

True to his promise, “Sugar” Salam produced some very sharp counter-punching from the get-go, mixing precise jabs with quick combinations to body and head, while a charging Gonorenda clearly had problems finding his mark.

In the sixth round Salam caught Gonorenda with a hard left that visibly hurt the visitor, and only the ropes prevented him from going down. Salam was quick to follow up with a long flurry of unanswered punches, prompting referee Darryl Ribbink to step in and wave the fight off.

Chaos in Lagos it was, as fans rushed the ring to celebrate with the new WBF All Africa Champion who took his record to 12-2 (7). Fellow Southpaw Gonorenda drops to 12-13 (7) after resurrecting his career by winning his previous five outings.

In the evenings co-featured attraction, Olanrewaju Durodola won the vacant WBF World Cruiserweight title with a third round technical knockout of Maroy Sadiki from D. R. Congo, who appeared to pull a muscle in the second round and was forced to give up in the third.

It was a very anticlimactic experience for Durodola, who improved his professional record to 29-6 (27), having fought some of the best in the world in recent years. In tears about his bad luck, Maroy Sadiki falls to 15-2 (7).

Next up for Durodola could be a first world title-defense against Tony Salam, who called his countryman out in the ring following his victory. A Durodola vs. Salam all-Nigerian WBF World Championship fight would certainly be a big attraction in Lagos, and Kalakoda Promotions called it inevitable.