/** * The header for our theme. * * Displays all of the section and everything up till
* * @package pandrah */ ?> WHYTE AND CHISORA COLLIDE ON DECEMBER 22 – The Pugilist 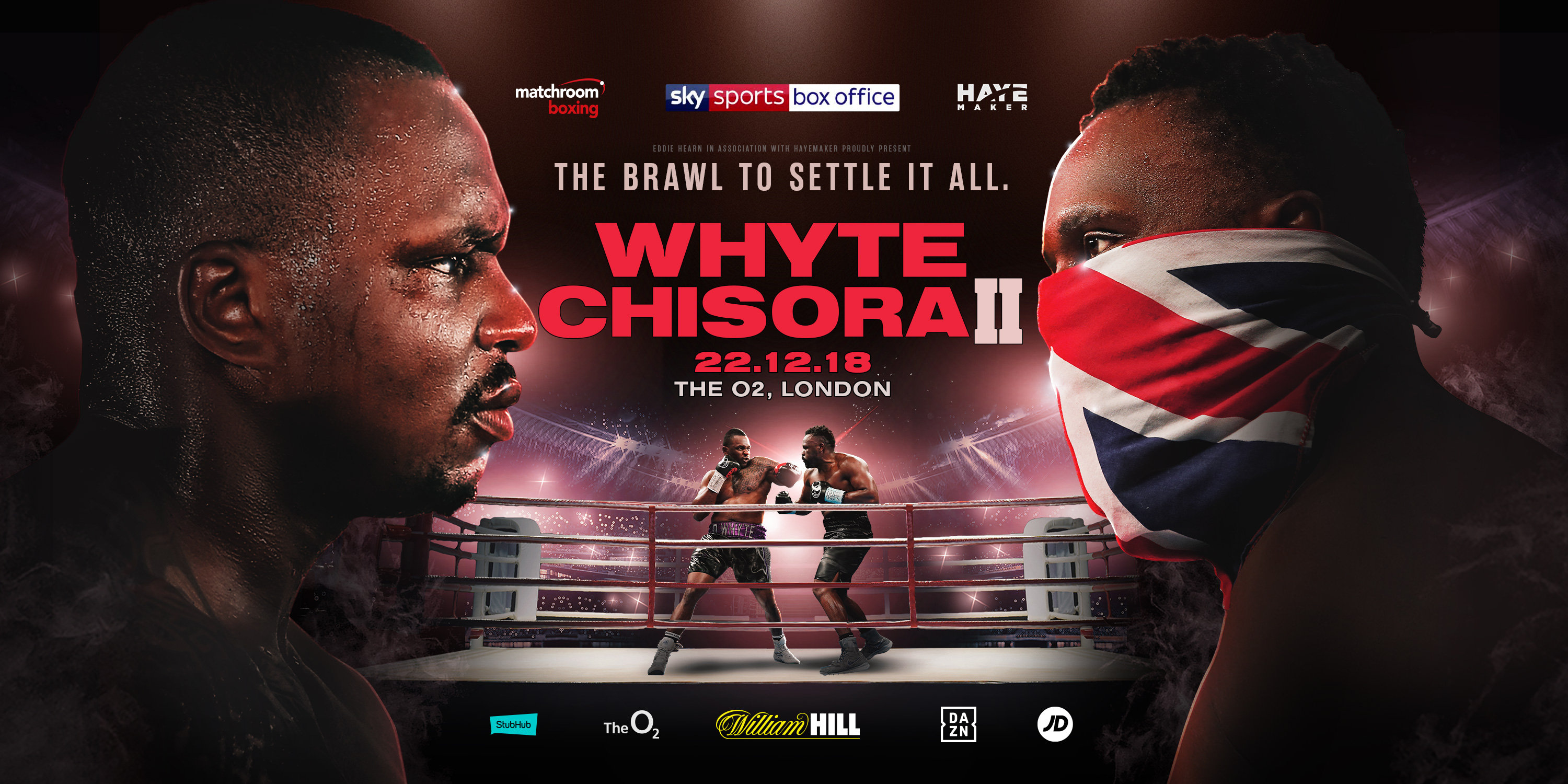 Dillian Whyte and Derek Chisora meet in one of the most highly-anticipated Heavyweight rematches in recent times at The O2 in London on December 22, live on Sky Sports Box Office in the UK and DAZN in the US.

The date will mark just over two years since their epic Fight of the Year contender at Manchester Arena, where Whyte edged out Chisora via a controversial split decision after 12 relentless rounds of brutal action.

Since that night, Brixton’s Whyte has gone from strength to strength, and now finds himself on the cusp of World title action after big wins over Australia’s Lucas Browne and New Zealand’s Jospeh Parker.

Whyte destroyed Lucas Browne with a devastating sixth round KO in March before dropping and outpointing former WBO Champion Parker in a gruelling contest at The O2 in July to bolster his claim for a World title fight.

Finchley star Chisora has been gunning for a rematch with ‘The Bodysnatcher’ ever since their first memorable meeting and finally gets the chance to avenge his loss against the WBC Silver Champion in an eagerly-anticipated Christmas cracker.

A rejuvenated Chisora is back on the World title hunt after sensationally stopping former World title challenger Carlos Takam in eight rounds on the undercard of Whyte’s clash with Parker at The O2 in July.

Chisora, now managed by old foe David Haye, has long maintained that he did enough to beat Whyte in their first meeting and has promised to take it out of the judges’ hands by knocking out Whyte when they meet again in December.

“This is going to be the donkey’s final destination,” said Whyte. “This will be Chisora’s last fight, the donkey’s last ride. I think that he needs to really have a good think about taking this fight because he’s going to be heading home after the fight looking like he’s been run over by a truck. I believe that I’ll knock him out in devastating fashion this time. Last time was my first 12 rounder and I was a little bit inexperienced but this time I’ll know exactly what to do. He’s at the end of the road.

“This is Heavyweight boxing and you never know what’s around the corner, but I’ve done what I need to do to secure a shot at a World title. There’s always something getting in the way, other fights being made or money and politics ruining things, but after I finish Chisora nobody can deny me my shot.”

“On Saturday 22nd December, you will all witness exactly what ‘WAR’ Chisora is about,” said Chisora. “I’m not messing, I’m not playing at boxing. Dillian has spent the last two years avoiding getting back in the ring with me. He knows exactly what it feels like to go toe-to-toe with me. For the next 7 weeks he will have sleepless nights knowing what he has finally signed up to. His last couple of opponents didn’t come for battle, they didn’t even put heat on Dillian, on December 22nd I’m coming to burn him up!

“I was cheated in our first fight by the judges, everyone knows that I was the true victor. This time I have a score to settle, Dillian won’t be hearing the final bell to be saved by the judges. I will be stepping in the ring a different fighter. I have everything to prove and it all to lose. ‘Dell Boy’ is no more, ‘WAR’ Chisora doesn’t cut corners, he doesn’t skip sessions, he doesn’t look for the easy option. I’m in the gym every day pushing my body to its limit. I’m in complete control of my destiny, December 22nd will be WAR.”

“The first fight was one of the best Heavyweight fights we have ever seen and I believe the rematch can eclipse even that,” said Eddie Hearn. “Both fighters enter this fight in their best form ever with everything on the line. We are guaranteed an absolute war on December 22 at The O2 and I cannot wait!”

David Haye, CEO of Hayemaker Boxing and manager of Chisora, said: “Without question there is a different fire in the eyes of ‘WAR’ Chisora, for two years he has wanted to settle the score with Dillian and finally he has the opportunity to do this. He has embraced everything we have thrown at him. Derek has huge untapped potential, the fact he has reached out to me, someone historically he had such animosity with for help demonstrates the lengths he is willing to go in order to realise the best version of himself.

“Dillian is going to be stepping in the ring with a completely different Derek ‘WAR’ Chisora, a fresh focus, a new outlook and an incredible desire to capture the World Heavyweight Title. This will be WAR.”

Tickets are available to purchase now for O2 Priority customers via www.theo2.co.uk and go on sale to Fight Pass members on Friday 2 November at 1.00pm via www.stubhub.co.uk

General Sale tickets are available to purchase at 1.00pm on Saturday November 3 from StubHub (www.stubhub.co.uk), The O2 (www.theo2.co.uk) and Matchroom Boxing (www.matchroomboxing.com)