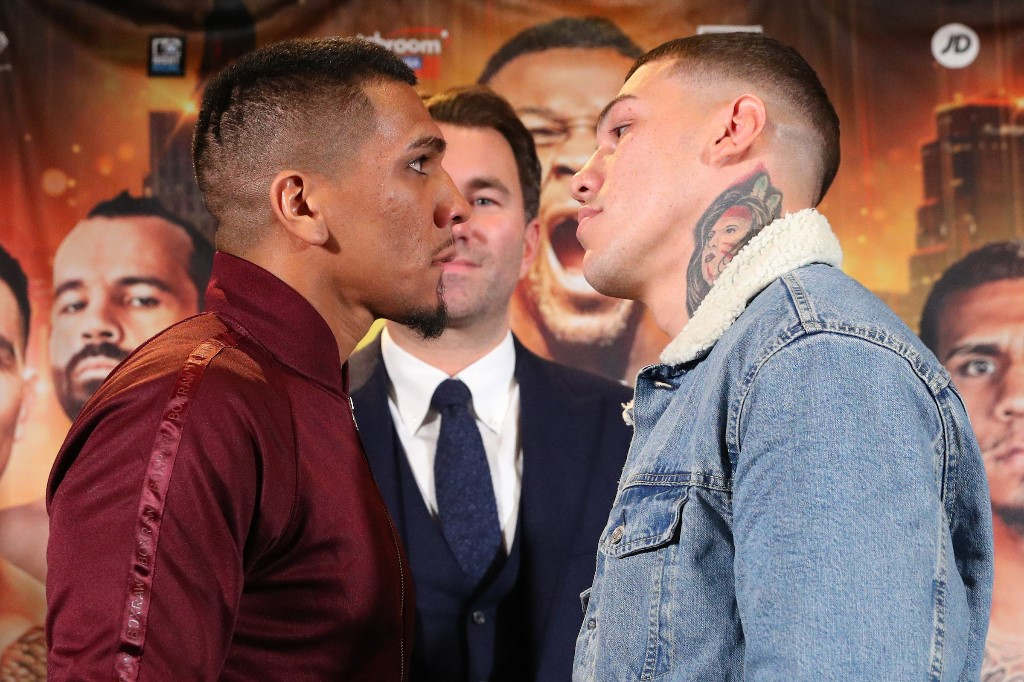 Luis Arias wants to make Gabriel Rosado eat his words and prove he’s not a ‘bitch’ by beating him in a Middleweight war at the Kansas Star Arena in Mulvane, KS on Saturday night, live on DAZN.

Arias is back in action for the first time since losing out on points to Daniel Jacobs in New York last November, siting a huge blister as the cause of him having to adopt a defensive approach against the now-IBF World champion who handed him a first career loss in his 19th fight.

When ‘Cuba’ and Rosado met in a press conference to announce the fight in the Big Apple, the pair exchanged harsh words on their respective career – with Rosado’s ‘bitch’ jibe a counter to Arias pointing out the number of losses and KO’s the Philadelphian has suffered – and a $10,000 wager being laid on the bout.

The pair will talk for one final time at tomorrow’s press conference in Wichita and Arias expects to hear more of the same, but he’s ready to prove that doubters wrong and show the Jacobs loss has made him a stronger fighter.

“That’s his only stab at me to say that I ran like a bitch against Jacobs,” said Arias. “But I didn’t get KO’d. He’s had two feet against plenty of guys and got KO’d, beaten up badly. I had a little scratch on my face after the Jacobs fight.

“I was physically and mentally ready for the fight and I believed I would win. I made a rookie mistake with my footwear and I learned a lesson the hard way.

“The fact that I was able to get out of that fight against a 190lbs guy with just a scratch, it shows I can compete with the best and it’s time to get my things in order and really prove that I can hang with all the top guys.

“I am putting pressure on myself to erase the bad taste I left last time, that’s the task this weekend. I need to prove that I am not a little bitch. It may have looked like I ran like one but I am not – I had to do that to survive and make the 12 rounds. I am a true warrior and I love the wars, I love to bang it out – I just wasn’t physically capable of doing that in the Jacobs fight.

“I left a sour taste in the mouths of the fans in the Jacobs fight but I am a better and more mature fighter now, I’ve learned from it and I think that this is the fight that changes my career. I’m a warrior, he’s a warrior – it’s going to be bloody but the blood is not going to be mine.

“He’s got a lot of miles on the clock but he’s durable. If I’d had this fight before the Jacobs fight then I would have been readier for that stage, but it didn’t work out that way. I get a fresh chance and a do-over now, and I’m going to do this right this time.”

Arias’ clash with Rosado is part of a huge night of action in Kansas in association with KO Night Boxing with a host of stars and local talents in action.

Brooklyn’s Heavyweight star Jarrell Miller meets fellow unbeaten big-hitter Bogdan Dinu in a crunch clash at the top level of the division, while chief-support provided by the brilliant two-weight World ruler Claressa Shields who looks to add the WBC Middleweight strap to her WBA and IBF crowns against tough Scottish challenger Hannah Rankin.

There’s an all-Mexican clash and a homecoming for Brandon Rios against Ramon Alvarez, brother of ‘Canelo’’, as both men look to make a splash at Welterweight.

Unbeaten contender Anthony Sims Jr. makes a move to Super-Middleweight and Brooklyn’s exciting newcomer to the Middleweight scene Nikita Ababiy, fresh from a first round KO on debut in Chicago earlier in the month, is also in action.