/** * The header for our theme. * * Displays all of the section and everything up till
* * @package pandrah */ ?> Meriton Karaxha WBF International Champion In Quick Time – The Pugilist 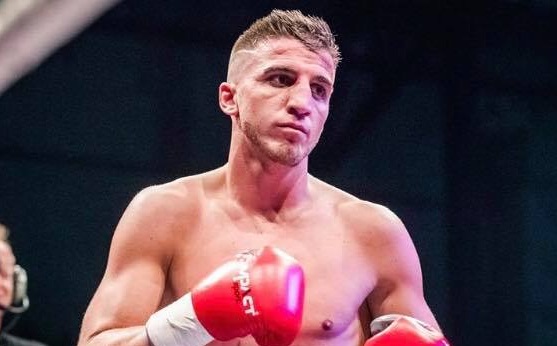 Belgium-based Albanian Meriton Karaxha is the new World Boxing Federation (WBF) International Welterweight Champion, winning the vacant title against Jean Moraiti from France on Friday night, November 23, in Lessines, in a fight that ended before it really got started.

Karaxha started the fight fast and tried to force Moraiti backwards, while the Frenchman stayed in close and attempted to counter with hard hooks. This proved to be a bad idea, as it left his body wide open and enabled Karaxha to land good body-shots.

Moraiti felt the sharp punches from Karaxha, and ended up in his own corner where he was floored by a long barrage of shots to body and head. One punch landed a little too late, and Moraiti complained with good reason.

But before referee Philippe Wouters could finish his count and potentially deduct a point from Karaxha, the French corner threw in the towel and gave up for their man. Wouters kicked out the towel, refusing to accept the surrender, but Moraiti wanted no more and turned his back.

Official time of stoppage was 2:37 of the first round, as Meriton Karaxha (26) improved his professional record to 21-5-2 (8). Jean Moraiti (26), a former WBF International Champion at Lightweight and Light Welterweight, drops to 17-15-4 (2). The fight headlined a show promoted by Elite Promotion.