/** * The header for our theme. * * Displays all of the section and everything up till
* * @package pandrah */ ?> Yammouni Stops Tilliot, Deja-Vu For “Baby Jake” Mbangatha – The Pugilist 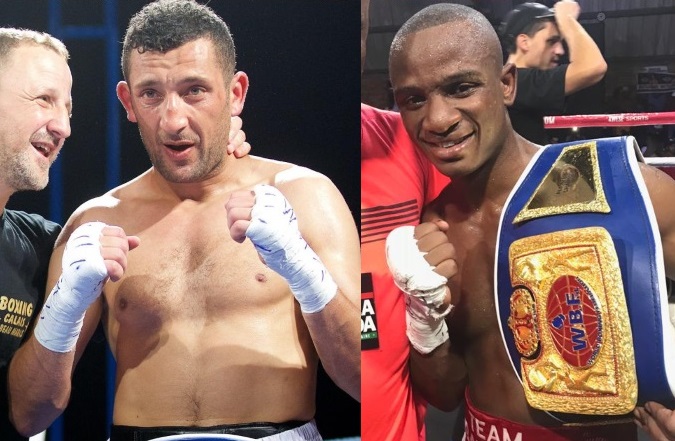 A former WBF International Middleweight Champion, Yammouni floored Tilliot in the second round with a perfect right hand, a punch that caused the visitors left eye to close almost instantly.

Tilliot beat the count, but soon realised he would not last long with one eye, and went all out trying to score a knockout.

The fight quickly turned into a brawl, but when the eye had completely shut in round three, referee Mohamed Hireche had no choice but to wave the fight off, declaring Yammouni, now 12-6 (4), the winner by technical knockout.

Thembani “Baby Jake” Mbangatha, the WBF All Africa Featherweight Champion, made a successful first defense of his title in front of a packed crowd at the Wynberg Military Base in Cape Town, scoring a unanimous decision over his best opponent to date in Doctor Ntsele.

When Mbangatha won the WBF title he did so despite dislocating his shoulder and boxing several rounds with one arm.

Amazingly the same thing happened against Ntsele, the only difference being that this time the shoulder popped back in immediately. Although many rounds in the high-paced encounter were close, Mbangatha kept his nose ahead through a better and more effective work-rate.

Ntsele was always in the fight and gave his young foe a stern test, but when he tried to take advantage of Mbangatha´s injury by further upping the pace, it was too late.

Judges Elroy Marshall and Eddie Marshall both scored the fight 97-93, and Judge Fred Van der Ross had it 99-91. Mbangatha improved his undefeated record to 10-0 (4), while Ntsele, a former WBF Intercontinental and All Africa titlist, drops to 22-12-1 (14).