/** * The header for our theme. * * Displays all of the section and everything up till
* * @package pandrah */ ?> Tommy Jacobs Does The Business in Style!﻿ – The Pugilist 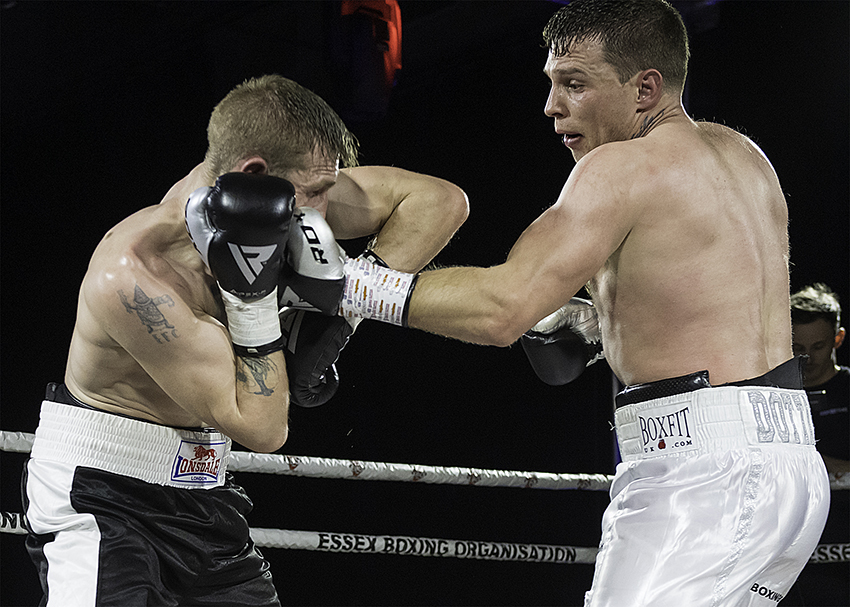 Event Report: Jacobs Does The Business in Style!

Boy oh boy what a sensational night of boxing at the Charter Hall in Colchester on Saturday night.  It may have been a small hall show without any Championship fights on the card but you would never have guessed that by the World class presentation and electric atmosphere.

World Boxing Foundation (WBF) International and European Super Welterweight Champion Tommy ‘Sweet T’ Jacobs had two hats on that night, Promoter and Fighter, both of which he accomplished in stunning style.

The lighting rig, with big screens above showing all the action close up, along with the pyrotechnics and ring walk light show rivalled any of the major Championship events at the O2 or Maddison Square Gardens or similar and the way the show was run was so slick you’d have thought this was being beamed live around the world adhering to strict TV schedule times.

OK, the scene is set, so let’s get to the fights themselves, starting with the aforementioned Tommy Jacobs versus unbeaten Super Middleweight Scott ‘Mad Dog’ McIntyre from Liverpool, which was sponsored by Roman Cars, The Grapes Pub, BOR Scaffolding and RDX Sports

Yep that is not a mistake Jacobs had gone up two weight divisions for the fight, as he is hoping to challenge Bardney, Lincolnshire’s Nathan ‘The Nightmare’ Decastro later in the year should Decastro beat Daniel Adjei Sowah and secure the World Boxing Union (WBU) World title on April 27th.

Now I’ve seen all of McIntyre’s fights and seven of Jacobs’ ten fights to date, so was intrigued that Jacobs chose such a tough unbeaten opponent, but also in a way understood, as McIntyre’s fight style is not that dissimilar to Decastro’s.

When the opening bell rang, Jacobs strode forward and began letting rip with massive shots to body and head, McIntyre sensibly covered up initially as the blows rained down on him but soon responded with some shots of his own, only to be caught by a peach of a shot that clearly rocked him to the core.

Seeing that he had rocked McIntyre, Jacobs jumped in and began raining down further big shots to finish off his opponent, however McIntyre is granite like and absorbed the punishment before once again letting his hands go.

Jacobs walked straight threw them and continued his massive attack and backed McIntyre on to the ropes.

McIntyre switched from his normal fight style, which is full on attack, attack and more attack, to tying up his opponent and boxing on the inside.

Whilst this, Jacobs on the attack throwing big shots followed by a lot of close up battling, became more or less the format for the contest, there were some sensational open action to thrill the fans, such as in round five, following some close on the inside action McIntyre sustained a cut above his right eye. Jacobs took a step back and and started targeting with stiff jabs, before firing off big lefts and rights to the head.

Coming out for the sixth and final round Jacobs switched from full on attack to getting behind his jab, which provided McIntyre the opportunity to be on the front foot and push Jacobs back on to the ropes.

Jacobs, even though now on the defensive, displayed some sensational ring craft, dipping and slipping to avoid most of the shots coming his way, before countering in style.

After six exhilarating rounds its was to Referee Lee Murtagh’s scorecards which read a 60-54 in favour of Colchester’s Tommy Jacobs, whilst definitely the right result it just doesn’t convey how close many of the rounds were.

Preceding Jacobs-McIntyre was a four round Featherweight contest between Clacton on Sea’s Ben ‘The Claxican’ Cook and Ghanaian Michael Barnor, sponsored by Roman Cars.

Cook shot out of his corner as soon as the opening bell rang and went straight on the attack, immediately negating his much taller opponents reach advantage, targeting the body with big left and right hands.

Have to say that Cook’s tactics more or less mirrored Jacobs’ in his fight with McIntyre, about the only difference being that Barnor was not as comfortable as McIntyre boxing on the inside.

Cook was relentless and by about three quarters point his constant pressure paid off, as Barnor was forced to take to one knee following a pin-point accurate shot to the lower rib.

For the next three rounds, Cook just kept the pressure on the Ghanaian, allowing Barnor no room to operate and showcase his well honed skills when boxing long, which those ringside only got glimpses of on the night, due to Cook’s constant pressure.

The third fight of the night pitted Hove’s Navid Iran against Liverpool’s Kyle McNicholas in a four round Light Heavyweight contest, sponsored by Roman Cars.

Iran is very much an all action, attack minded character and tonight he stuck to his game plan and went full-on right from the opening bell, peppering McNicolas with huge shots to body and head.

McNicholas, despite having to cover up initially, managed to create a little space and let his hands go, which just seemed to encourage Iran to close McNicholas down before letting rip with a barrage of shots culminating with a massive bodyshop, that sent the Liverpudlian down to the canvas and clearly in distress, leaving Referee Lee Murtagh no option but to wave the fight off on the 56 second mark of the first round.

What a sensationally close fought contest, both Porter and Kelly entertaining the assembled crowd with some fantastic boxing.

With Porter, coming off a close debut loss to Steve Sunners back in November, and Kelly coming in off the back of a classy victory over Dougie Vincent back in February, it was clear from the opening bell that both fighters were intent on having a perfect unbeaten start to the year, as they battled it out at centre ring.

Each second of each round was fought with such passion and skill it was a joy to be ringside observing. It was like a mix of a chess match and a choreographed routine, as  both combatants showcased their finely honed skills to a highly appreciative crowd.

The opening fight of the night see Ipswich’s Rob Elden against late replacement Liverpool’s David Taylor, sponsored by RDX Sports. Taylor literally was a very late replacement as original opponent David Calveley had to pull out on the Friday.

Elden shot out of the corner as the opening bell chimed, taking the fight to his opponent, Taylor immediately got behind his jab after the initial assault, in an effort to stall Elden’s forceful march forward.

Elden just kept coming forward forcing Taylor into a short toe-to-toe slugging match before conceding control and being forced back on to the ropes.

As the round was entering it’s final minutes Taylor was forced back into defending with his back towards his own corner, Elden lands a heavy shot to Taylor’s ribs, Taylor initially covers up and then goes to throw a big right but as he does let’s out a loud gasp and drops to his knees clearly in distress.

Referee Lee Murtagh immediately began the count, but it was clear to all in attendance Taylor was in a lot of pain so halted the contest so the medical team could attend to the wounded combatant. Official time of stoppage two minutes and thirty six seconds of the first round.

Roll on the next Tommy Jacobs’ promoted event, which takes place at the Prince’s Theatre in Clacton-on-Sea on the 22nd June 2019, if it’s just half as good as this one then it’s going to be a must see show.