/** * The header for our theme. * * Displays all of the section and everything up till
* * @package pandrah */ ?> Five WBF Regional Title Fights Scheduled For June – The Pugilist 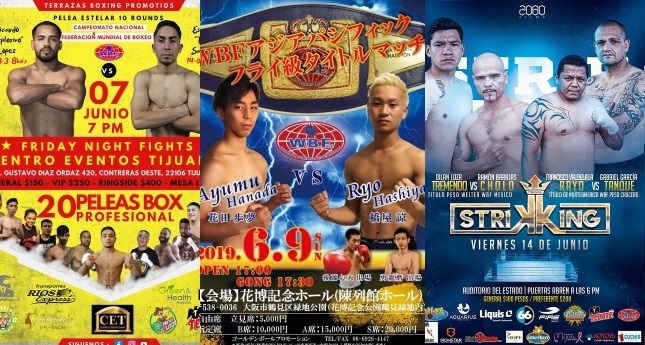 It all kicks off on June 7 in Mexico, when 20-year-old undefeated local favourite Esteban “El Towy” Sanchez, 14-0 (9), takes on Ricardo Lopez, 10-3-3 (8), for the vacant WBF Mexico Lightweight title at the Tijuana Events Centre.

Interestingly, both boxers will be boxing in their birth-country for the first time as professionals, as Hanada is based in Mexico and Hashiya is fighting out of Thailand.

Since losing to Hee Jung Yuh in South Korea for the Intercontinental Super Flyweight title in December of 2017, Ping Shi (21) returned in style to capture the WBC Asian Boxing Council belt last May, and will now move up in weight to face the experienced 32-year-old from Okinawa.

Gabriel Adrian “El Tanque” Garcia, 8-3-2 (1), and Francisco “Rayo” Valenzuela, 19-13 (14), will fight for the vacant WBF North America Cruiserweight title in a battle with plenty of Mexicali bragging rights also on the line.

In the evenings co-feature, WBF Mexico Welterweight Champion Ramon “Cholo” Barajas, 12-17 (5), from Tepic, appears to be in for a tough first title-defense against 20-year-old local man Dilon “El Terrible” Loza, 14-2 (9).