/** * The header for our theme. * * Displays all of the section and everything up till
* * @package pandrah */ ?> WBU Title on the Line for McGivern Vs Iran II on 22nd June – The Pugilist 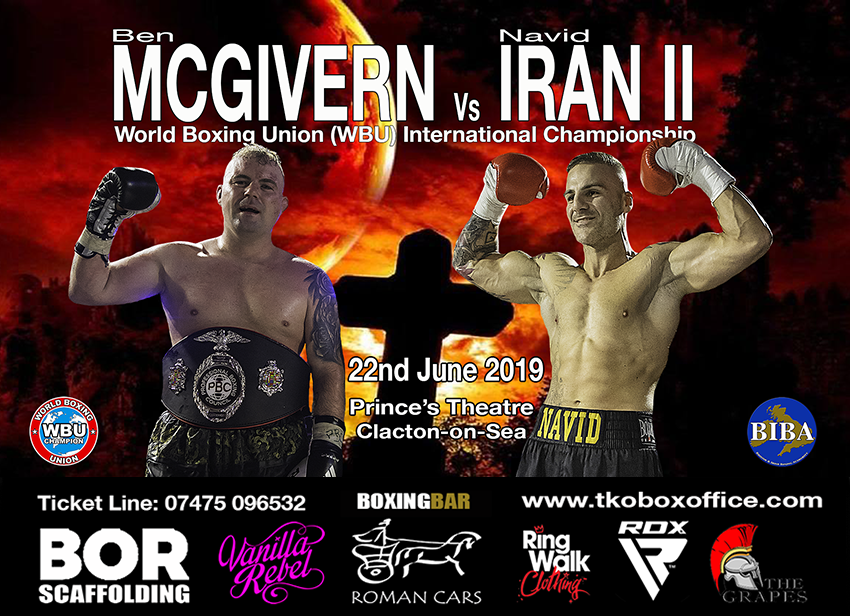 Sometimes there are fights that just capture the Boxing World’s attention, Gatti-Ward, Ali-Frazier, Froch-Kessler, Holyfield-Bowe, Marquéz-Vazquéz etc that afterwards the fans go out of their way demanding a rematch and in some cases a trilogy or more as in the case of Marquéz-Vazquéz!

In each of the cases mentioned above these were prime time internationally broadcast events, however sometimes there’s a fight that slips under the radar of the majority of fans for one reason or another.

One such fight was the Ben McGivern versus Navid Iran ‘Fight of the Year’ nominated Battle Royale back in November last year, which was broadcast live only on Facebook.

Whilst it did pass under the radar of the majority of fans worldwide, it may surprise many readers to learn that after the first fight, so many boxing fans were lighting up Social Media calling for McGivern-Iran II, that Promoter Tommy Jacobs just couldn’t ignore them and so on the 22nd June at the Prince’s Theatre in Clacton-on-Sea these two warriors will enter the arena to battle it out once more, this time for the World Boxing Union (WBU) International Crown.

Back in November McGivern-Iran, battled it out for the vacant Professional Boxing Council (PBC) Silver International Light Heavyweight title was the headline bout on Tommy Jacobs’ history making event, the first professional boxing event in Clacton-on-Sea since 1939, when Mike Kevan beat Charlie Mack.

Battled it out is the correct term; this was a Battle Royale of epic proportions.

As the round progressed Iran landed a couple of cracking shots that again forced McGivern to cover up. Iran kept up the pressure with big shots, whilst McGivern caught many with his gloves some big rights got through the Scots guard, shaking him to the core.

How McGivern made it to the end of the round is unfathomable, his legs were well and truly gone, but somehow he did.

After eight fantastic rounds of boxing it was Ben McGivern declared victorious, but just who will reign victorious on the 22nd June.

In addition to the three Championship contests, there are also a number of International matches, the first featuring World Boxing Council (WBC) Asia-Pacific Champion, India’s Neeraj Goyat in an eight round non-championship bout against Tanzania’s Amos Mwamakula.