/** * The header for our theme. * * Displays all of the section and everything up till
* * @package pandrah */ ?> Another Tough Test For Porter, Faces Carreo on 22nd June – The Pugilist 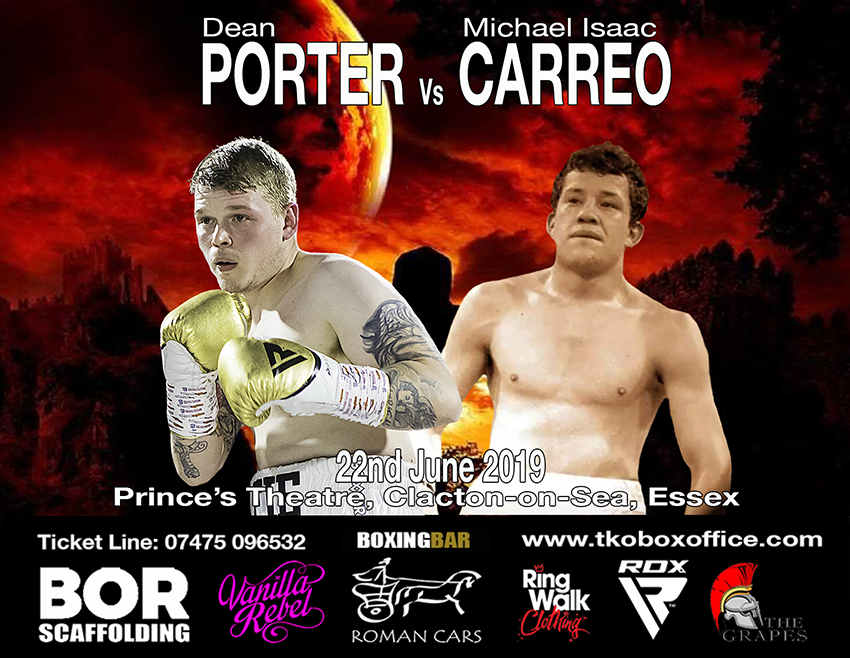 Since turning Pro back in November Dean Porter has proven that he likes to do things his way, the right way as he puts it, the Colchester youngster preferring genuine 50/50 battles right from day one, not being carried for the first half a dozen fights or so as seems to be the norm these days.

On his debut he faced Liverpool’s unbeaten Steven Sunners, next up was Dundalk, Ireland’s former WBF title challenger Michael Kelly and just last month went up against another unbeaten prospect in Jack Jones from Leeds.

So it came as no surprise that when promoter Tommy Jacobs offered him to fight tough Nicaraguan Michael Isaac Carreo on the undercard of Jacobs’ World Boxing Union (WBU) & World Boxing Foundation (WBF) World unification battle with Nathan Decastro on the 22nd June, Porter jumped at the opportunity, even after Jacobs had added that Carreo had previously fought for both the International Boxing Organization (IBO) and World Boxing Council (WBC) Youth World Championships.

Speaking earlier Porter explained why he accepted another tough challenge;

“On June 22nd I’ll be fighting my hardest opponent to date, that’s for sure. Michael has fought for both the WBC and IBO youth world titles along with other titles.

“I have sold myself short in all my other fights by not making weight properly, it’s going to be different this time and everyone will see the best Dean Porter.

“When I come out of this fight victorious I’m hoping to push for a title by the end of the year, but first have to get past Michael.

“As I said I haven’t had the best start to my boxing career but that is all changing from this fight on, I would like to say a massive thank you to the team I have around me, I couldn’t ask for anyone better.”

Dean Porter versus Michael Isaac Carreo features on the undercard of the Nathan Decastro versus Tommy Jacobs for the World Boxing Union (WBU) and World Boxing Foundation Super Middleweight Championships that headlines the show.