/** * The header for our theme. * * Displays all of the section and everything up till
* * @package pandrah */ ?> DECASTRO-JACOBS WORLD TITLE CLASH LIVE ON GINIKO USA TV THIS SATURDAY – The Pugilist 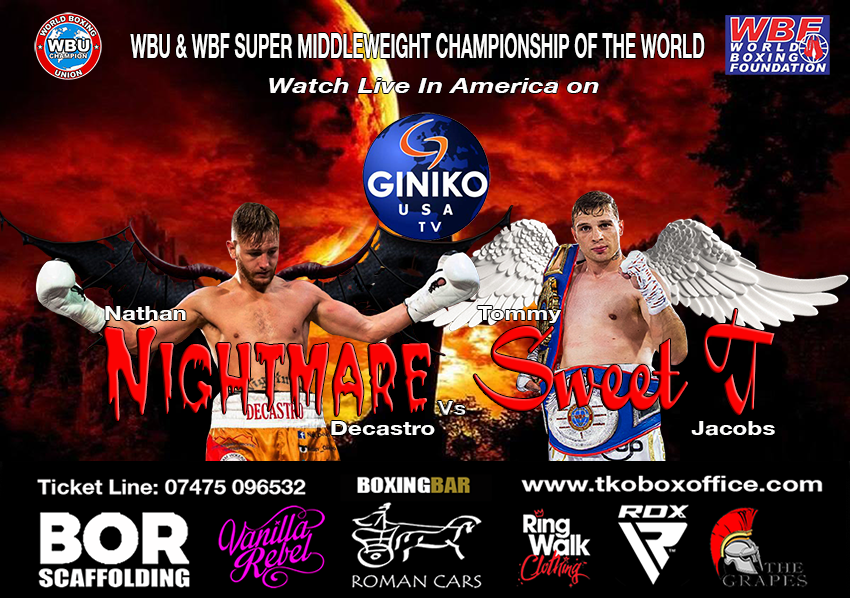 On learning that the event will be broadcast in America by GINIKO USA TV this weekend one of the main protagonists, Tommy Jacobs, said.

“It’s such fantastic news that American viewers will also be able to watch the show on GINIKO USA TV.

“It’s going to be a great show, It’s not often you get an event where all the fights are a hundred percent genuine 50/50s.

“This is a massively risky fight for me, I’m not only taking on someone who’s a current world champion, with a very impressive record, but stepping up two weight categories against someone who by all accounts is supposed to be a massive puncher.

“I will be looking to really impress on Saturday night, this is a huge opportunity for me, one I intend to take firmly with both hands, literally.”

Main support for the Decastro-Jacobs WBU-WBF Unification battle is a further Championship contest, this time for the WBU International Light Heavyweight Crown that pits Scotland’s  Ben McGivern against Hove, Sussex’s Navid Iran in a rematch of their classic Battle Royale back in November, as well as further International non-championship bouts and all contests will be broadcast live on GINIKO USA TV, the full fight card is:

Giniko USA TV is an over-the-top television streaming service with the most comprehensive USA based content. Giniko USA TV customers can watch their favorite inspirational programming on all major devices via the Free Giniko USA TV App. USA programming can be accessed inside or outside of the home on iOS, Android Mobile, iPad, tablet, web browsers, and on Roku, Apple TV, Android TV or Amazon Fire TV, iOS and Apple TV.

Giniko’s best in class online video platform provides everything a USA based content owner needs to host, manage, or stream their linear channel to customers across the United States and around the world. The benefits of working with Giniko USA TV include complete automation, guaranteed stability, rapid deployment, streamlined support, and a superior network that provides content owners with peace of mind. Giniko offers source acquisition, ingest & processing, and delivery to all devices.

Powered by Tulix, a premier global video solutions company and CDN services operator, Tulix offers live streaming direct to the consumer with no buffering. Tulix provides complete streaming solutions and colocation services to customers around the world from its data center in the heart of Atlanta, GA.

Giniko USA TV Programming is available on any device anywhere in the world. No matter where you live, or travel customers can watch their favorite USA based programming.

To purchase the PPV ($14.99) on GINIKO USA TV please go to https://events.ginikousa.com/buynow.php?plan=4