/** * The header for our theme. * * Displays all of the section and everything up till
* * @package pandrah */ ?> Fight Report: Cook Digs Deep in Battle Royale Against Aguilar to Secure First Title – The Pugilist 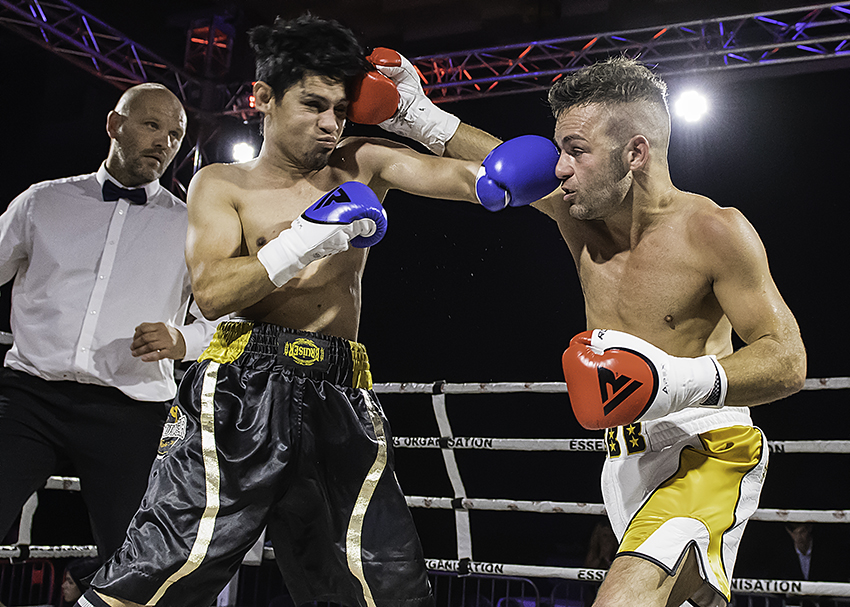 On Saturday night, the fans turned out in force to support Clacton-on-Sea’s Super Bantamweight prospect Ben ‘The Claxican’ Cook make his first challenge for a Championship accolade, against Nicaragua’s Jose ‘El Pollo’ Aguilar, for the Professional Boxing Association (PBA) International Masters Bronze Championship at the Charter Hall in Colchester.

Right from the opening bell both protagonists shot out of their corners in determined fashion and immediately exchanged opening shots at close quarters and so began an amazing Battle Royale of immense magnitude.

For the entire three minutes the pair of pocket rockets went at it hammer and tongs, both unbelievably neither seemingly prepared to pace themselves for the long haul, instead preferring to exchange power shot after power shot, much to the delight of the fans ringside. To my view it was Aguilar that won the round, but just by a very close margin.

Initially Cook took the fight to the Nicaraguan in the second, using great ring craft to get on the inside of the taller man. Aguilar kept his cool and as the fight progressed managed to get back on the front foot and begin to back the ‘Claxican’ up. Cook though is a battler and so began another close quarter battle of immense proportions, this time I scored the round in favour of Cook, again by a very close margin.

Unbelievably both warriors again went on the attack right immediately the bell rang, another amazing non-stop full-on war ensued. What a stunning round, the crowd were on their feet screaming for the full three minutes. I couldn’t split them – points wise – a drawn round if ever there was one.

Round four was virtually a mirror image of the third, both lads throwing caution to the wind as they tried to get their opponent out of there as quickly as possible. Again I scored it a drawn round as it was such a closely fought round I just couldn’t split them points wise.

Sorry to use the term unbelievably so soon but unbelievably the pace didn’t slow one iota for the fifth round, It was another fantastic all action affair, which I scored in favour of Cook by the slimmest margin.

The sixth was just as intense, however Cook began to show signs that the intensity of the first five rounds was having an effort on his stamina, the Claxican’s pace slowed dramatically as the round progressed and Aguilar took advantage with some great boxing to secure the round in my eyes.

I honestly expected the pace to be dramatically slower in the seventh, but no, somehow these two supreme athletes continued to battle it out close quarters at almost the same pace they did in the first. What a fabulous closely fought round, again I couldn’t split them points wise, to my eyes very much a drawn round.

So going into the final round I had the contest drawn, so to my mind whoever wins this round wins the contest and becomes the Masters Champion. Clearly both Cook’s and Aguilar’s corners thought the same as they sent their charges out for the final battle with instructions to take the fight to the other, as that’s just what they did and boy oh boy the final round was fought at some serious pace. With his corner screaming at him to keep on the attack and just keep throwing shots Cook somehow managed to dig in real deep and do just as instructed. For the entire round, although virtually out on his feet the Claxican just kept up the pressure, don’t get me wrong Aguilar wasn’t being defensive, he was countering punch for punch and even took control at times, much to the dismay of Cook’s corner.

I scored the round in Favour of Cook but how would scoring referee Jody Meikle score it, and come to that the previous rounds. Well it seems my scoring was the same or at least similar as Mr Meikle’s as when the scores were announced it was in favour of Cook and by a seriously close points margin of 78-77.

After the scores were announced and Cook received his Championship Belt, the Clacton based youngster praised his opponent and then went on to say how close the contest was and offered a a near future rematch, much to the delight of Aguilar, his team and the attending fans.

Round one was an edgy affair, both protagonists tentatively testing their opponent with strong jabs. As the round progressed Jacobs began to take the initiative and slip Gonzalez’s guard to let rip with lightning fast combinations, Gonzalez shrugged them off, occasionally he followed up with a counter but mainly just absorbed the shots and patiently await an opportunity to muster an attack of his own. Fairly easy round to score as Jacobs was by far the most active, action-wise.

Round two starts in similar fashion to the first, albeit more action in the first minute of the round than the entire first round, however due to Jacobs stepping up the attacks Gonzalez was able to work an opening and let rip with a powerful shot straight to the nose that shook Jacobs to the core.

That shot forced Jacobs to be a bit more cautious in his approach, yet the Colchester man still managed to fire a few more seriously quick combinations. In the final minute of the round Jacobs began to literally dominate the proceedings, dancing around the Nicaraguan before manoeuvring in and landing some big lefts and rights, then in the dying seconds of the round, just as Jacobs moved in for another attack Gonzalez let rip with a massive right to send Jacobs crashing to the canvas.

Jacobs jumped to his feet almost immediately, however his legs were well and truly gone and he uncontrollably staggered to the neutral corner. Without doubt Jacobs was not in a fit state to continue and referee Jody Meikle began to waive the fight off, just as the towel thrown by Jacobs’ cornerman fluttered into the ring. Official time of the stoppage being 2 Minutes and 55 Seconds of Round two.

Right from the opening bell local lad Carruthers went straight on the attack and caught Wint with a big right, Wint initially responded with a double handed flurry but was soon caught with another big right.

Wint tried to respond but got caught again, either the big shots had disoriented the Coventry lad or in panic he turned away and was caught again with a big right, Referee Jody Meikle immediately stepped in to check on, as well as have a word with Wint.

On the restart Carruthers went in hard and fast forcing Wint into a neutral corner, where he proceeded to let rip with both hands, Wint tried to defend, albeit in vain, leaving referee Jody Meikle no option but to step in and waive the fight off, on the one minute and forty-seven second mark of the first round.

What a fantastic night of fights, not just the pro fights, but also from the Amateur portion of the event which highlighted some future stars including the big punching London ABA Heavyweight Champion Ifeanyi Acporter, who won his fight against a fellow ABA star Jack Sheppard by knockout as well as a couple of lighter division fighters, Lewis Mulberry and Ron Oliver, who thrilled the crowd with with their undoubted skill and determination as they battled it out in one of the closest fought contests of the night, definitely look forward to these stars of the future joining the pro ranks in the near future.