/** * The header for our theme. * * Displays all of the section and everything up till
* * @package pandrah */ ?> Birthday Boy McAllister Beats Djarbeng Into Submission to Become Six Time, Five Division World Champion – The Pugilist 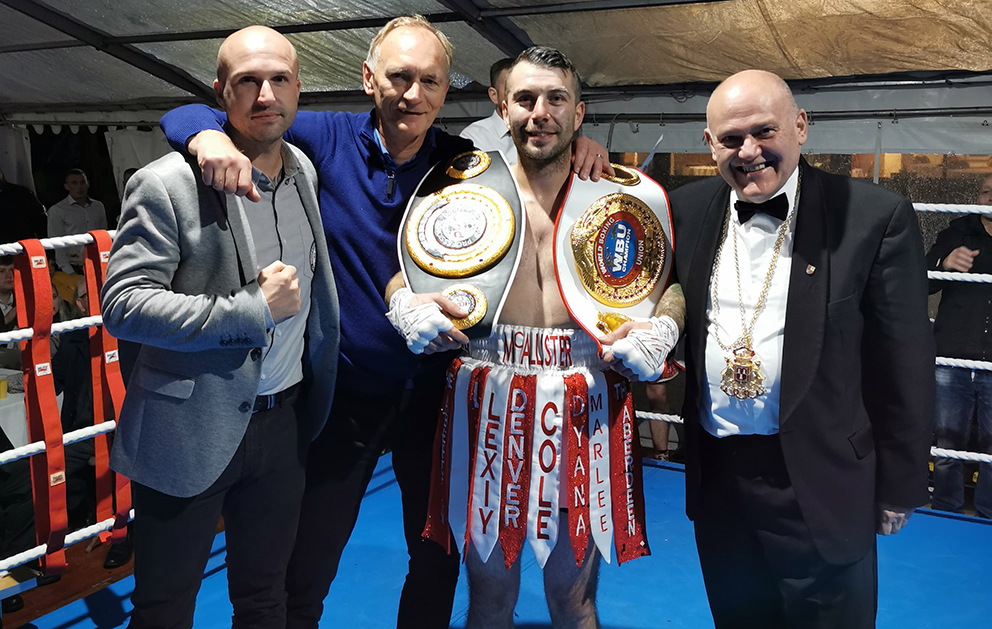 Storm Lorenzo may have been creating havoc across the UK yesterday, but even that could not stop the fans in Aberdeen turning out in force to support local hero Lee McAllister in his quest to become a Six Time, Five Division World Champion – on his 37th Birthday.

It was back in October 2007 that the Aberdeen Assassin won his first World title, stopping fellow Scot Craig Docherty in the ninth round to secure the World Boxing Union (WBU) Lightweight Crown.

Just five months later McAllister was back in Championship action, although not to defend his Lightweight title, but instead electing to move up to the Super Lightweight division to face and beat France’s Mihaita Mutu.

Instead of defending his newly won World crown McAllister elected to return to the Lightweight division and unsuccessfully campaign for the Lonsdale belt against John Murray.

Shortly after McAllister then secured the Commonwealth crown against Ghana’s Godfriend Sowah and successfully defended twice, against Australian Charlie King and Ghanaian Samuel Amoako before in 2011 moving back to the Super Lightweight division to once again successfully challenge for World Championship honours, this time against Hungarian Istvan Nagy for the International Boxing Organisation (IBO) Crown.

McAllister once again elected not to defend but instead chose to successfully campaign against Ghana’s Isaac Quartey for the Commonwealth title and then challenged Russia’s Denis Shafikov for the European Title, unfortunately failing to secure the European crown after injuring his hand in the 7th round.

Following a three year sabbatical from the sport between 2013-2016 McAllister returned to the fray and following a warm up contest against Will Cairns went straight back onto the Championship trail, first securing the World Boxing Foundation (WBF) Intercontinental title with a second round stoppage victory over Northern Ireland’s Michael Kelly in February 2017 followed just four months later securing the WBF World Welterweight Crown with a third round stoppage victory over Ghana’s Frank Dodzi.

In April 2018 McAllister surprised everyone when he stepped in the ring to face and beat Barrow-in-Furnace’s Lee Kellet in four rounder, at Heavyweight!

However it soon became clear why as the Aberdeen Assassin announced that he will face Danny Williams for the World Boxing Union (WBU) Heavyweight World Championship in July of that year.

McAllister once again prevailed and secured his fifth World Crown with a tenth round stoppage victory.

That brings us full circle to Saturday night at the recently opened Assassin Health & Fitness Village in Aberdeen where McAllister took on Ghana’s Richmond Djarbeng for both the World Boxing Union (WBU) and Professional Boxing Council (PBC) Super Welterweight Crowns.

Storm Lorenzo was in full swing as McAllister and Djarbeng made their way over from the main gym building to the Marquee erected in the grounds of McAllister’s flagship project for this historic contest.

Djarbeng was graciously welcomed into the arena, but when McAllister’s ring walk song “The One and Only’ started to blare out the place erupted into a euphony of cheers and extremely enthusiastic applause.

Right from the opening bell McAllister went on the attack against the much taller Djarbeng, the Ghanaian responds instantly taking advantage of his height and superior range to try and keep the ever dancing Scot at bay. In a way this seemed to suit McAllister, who started demonstrating his sensational ringcraft to fashion openings and against the odds land some cracking shots to the Ghanaians body.

As the round progressed McAllister  began backing Djarbeng up before letting rip with rib cracking hooks, one particularly powerful shot forced the Ghanaian to drop to a knee. On the restart McAllister went in hard and fast clearly going for a stoppage win, Djarbeng is tough though and managed to survive to the end of the round.

Second round virtually mirrored the first, including late on McAllister sending Djarbeng down with a massive body shot. As before on the restart McAllister went in hard and fast landing power shot after power shot.

How Djarbeng stayed on his feet is anyones guess but he did, well just, as with just seconds remaining McAllister landed a huge head shot that sent the Ghanaian reeling backwards and what looked sure to be heading for the canvas for a third time but instead, perhaps due to his height, Djarbeng sort of landed on the second rope and was catapulted upright, only to be welcomed back into the fray with another massive onslaught until the bell rang.

Djarbeng looked unsteady, possibly concussed even, and as his corner team went to work they were clearly concerned for their man’s wellbeing, so much so that the team had a quick discussion with the Ghanaian before signalling to referee Lee Murtagh their feeling that their man was not fit to continue.

To describe the elation that filled the arena as deafening would be an understatement, McAllister’s team joined in the celebrations, which included the entire assembled crowd singing Happy Birthday to the victorious McAllister that it would be quite some time before the awarding of the Championship belts.

Main support for the McAllister-Djarbeng was a rematch between Aberdeen’s Nathan Beattie and Ghana’s Tackie Annan, this time though there were two championship accolades on the line, World Boxing Union (WBU) and Professional Boxing Council (PBC) Super Lightweight International titles.

The last time these two fought, back in October 2017, Annan secured the victory via a second round TKO and by the nervousness of the ensemble crowd many in attendance were hoping it wouldn’t be a repeat performance from the Ghanaian.

They needn’t have been concerned Beattie controlled the proceedings in some style, easily securing the first two rounds.

Beattie came out hard in the third, forcing Annan onto the back foot, the Ghanaian got behind his jab and was just starting to make some headway when Beattie let rip with a massive shot to the head, to send the hurtling in to the air before crashing spectacular to the canvas.

Annan, whilst down wasn’t completely out and the plucky Ghanaian tried to muster the strength to move but was clearly dazed and confused leaving referee Lee Murtagh no option but to waive the fight off and summon the medical team to assist the prone Annan. Official time of stoppage just 51 seconds of the third round.

Prior to Beattie-Annan II see Barrow-in-Furnace’s Callum Pearson in action against Belfast’s Marty Kayes for the second time in six weeks, following original opponent Dmitrijs Ovsjannikovs having to pull out the day before.

What a cracking fight, Pearson is class and without doubt a serious prospect, but Kayes is as tough as they come. Pearson dug deep into his arsenal of shots but Kayes just kept absorbing them and coming back for more. After four highly entertaining rounds of boxing Referee Lee Murtagh’s scorecard read 40-36 in favour of Callum Pearson.

The third pro fight of the night pitted debuting Craig Leadbetter against a very late replacement in Andris Kleins, following the arrest at the Airport of Leadbetter’s original opponent.

Kleins was definitely the aggressor of the first round, the stocky Latvian taking the fight to the taller Leadbetter and letting rip with big right after big right, Leadbetter countered at every opportunity but couldn’t stop the Latvian juggernaut in his advance.

Round two was very much in the same vein as the first, however as the round progressed Leadbetter started to exert his authority more and more, however this just encouraged Kleins to come back with massive shots to the Scot’s head. Around the minute mark Referee Lee Murtagh called time-out and summoned the ringside doctor, Professor Michael Graham, to check on Leadbetter as he had noticed bleeding from the ear. After a quick check and discussion with Leadbetter, Professor Graham instructed Referee Lee Murtagh to stop the contest. Official time of stoppage one minute and eight seconds of the second round.

The second fight on the card pitted debuting Kevin Traynor against Latvia’s Ilgvars Krauklis in a four rounder. Well scheduled for four rounds as the fight lasted just seconds, following Traynor throwing his first power shot, to the head, which sent the Latvian down heavily. Krauklis did get to his feet before the count finished but was so unsteady on his feet – basically when he tried to walk forward it was akin to watching Bambi take it’s first steps – that Referee Lee Murtagh had no option but to stop the fight on the twenty four second mark of the first round.

The opening contest of the night featured local lad Kenny Allan making his debut against Latvian Andrijs Konovalovs in a four rounder.

Allan went straight on the attack right from the opening bell, backing up his much taller opponent onto the ropes where the seriously tough Scot proceeded to let rip with massive lefts and rights, initially Konovalovs covered up but soon realised that wouldn’t work so countered with both hands. Allan just walked straight through the counters with ease. Konovalovs managed to get off the ropes and started to use his height and reach advantage, well enough for a short respite before the plucky Scot started letting rip with big rights to the body.

The Latvian tried to stay his ground and boxed beautifully on the back foot, but then just as he looked to have his tactics right, Allan switched tactics and let rip with a massive right to send the Latvian down. Whilst Konovalovs did make it to his feet in time, he clearly wasn’t right, leaving Referee Lee Murtagh no other option than to waive the fight off on the one minute and fifty six second mark of the first round.

Prior to the pro section of the show see WBU/PBC Judge Graeme Beauly give a moving eulogy for Darren Johnstone, father of six, ex-pro with a 10-0 record, who recently passed away, which was followed by a ten bell tribute.