/** * The header for our theme. * * Displays all of the section and everything up till
* * @package pandrah */ ?> Castle Stylishly Secures World Crown in Thailand – Stops Bamrungpao in the Fifth. – The Pugilist 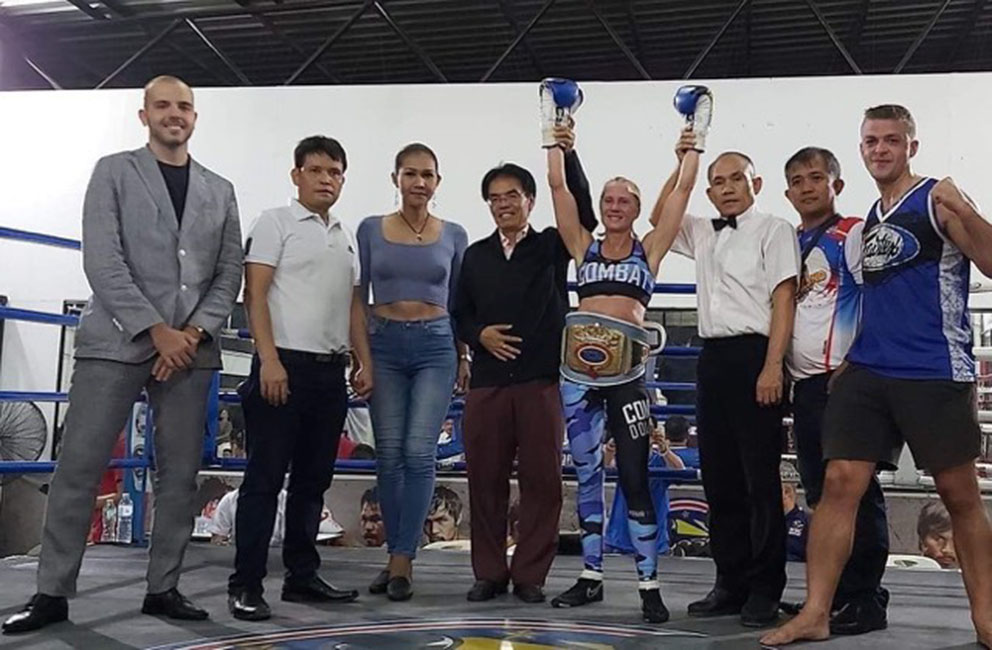 Bournemouth’s Denise Castle secured the WIBA World Minimumweight Crown on Saturday, with a sensational fifth round stoppage over Sutthinee Bamrungpao in Bangkok, Thailand.

Castle,who was named the World Boxing Council (WBC) most inspirational athlete of the year in 2013 when she was the WBC Muay Thai World Champion, switched disciplines to Professional Boxing in 2014 and scored her first victory over Dogmaifai Keatpompetch, also in Bangkok. Soon after she earned her second win, over Saranyaphong Theinthong in Nonthaburi, Thailand to secure a shot at her first Pro Boxing Championship, for the WBC Atomweight title against Momo Koseki in August the same year in Tokyo.

Unfortunately Castle failed in her attempt to secure her first Championship accolade as a pro boxer, after the referee stopped the contest after 29 seconds of the 8th round.

It would be four years before Castle would be back in Championship action, again for the WBC World Crown, against Czech Republic’s Fabiana Bytyqi. This time the fight, in Usti nad Labem, Czech Republic, went the distance, however more disappointment for Castle as the judges unanimously scored the contest in favour of Bytyqi.

Castle dominated the opening few rounds, deliberately keeping the pace high for the entire duration of each round and utilising her exceptional Ringcraft to keep Bamrungpao on the back foot as she peppered the tough Thai girl with solid rights and crisp combinations.

Bamrungpao fought her heart out, countering every shot that came her way throughout, but as the fight moved into the fifth stanza it soon became clear that the high pace of the fight, as well as the high level of shots she was taking, were taking its toll was affecting the Thai girl. As the round edged close to the second minute Castle stepped up the pace once more, backed Bamrungpao onto the ropes and let rip with a series of massive lefts and rights, the referee Worawut Duankao let the exchange continue for a few seconds longer but as there were no defensive shots being returned by Bamrungpao, he stepped in and waived the fight off on the one minute and fifteen second mark.

Speaking from her hotel earlier, Castle spoke briefly about the fight;

“This was a different fight than I had planned for. Having only seen one round of Bangrampao prior to the fight she actually came out as a vastly different fighter which along with the temperature being 37 degrees threw me in the first round.

“Bangrampao has a better reach than I had anticipated and it took me until round 3 to work past that and find my range.  However once that was settled I knew that it was just going to be a matter of when I would be able to finish this fight – with a very strong round 4 to me where I punished her body I managed to then switch to the lead hook in round 5 to force the ref to step in and stop the fight to save her from more punishment.

“As I said, this was not the fight I had prepared for!!!! Coming off a great 10 rounds against Bytyqi in my last fight in Czech Republic, the heat and unanticipated style and reach of Bangrampao took me by surprise – she was actually very hard to hit with her movement fighting off the back foot and I didn’t find my reach until the end of round 3 where a couple of good shots from her actually almost woke me up!!! However once that had clicked into place it was just one way traffic – and I am happy with the 5th round stoppage – clean, crisp and no injuries.”