/** * The header for our theme. * * Displays all of the section and everything up till
* * @package pandrah */ ?> The Freeman Juggernaut Rolls On – Stops O’Reilly in Four. – The Pugilist 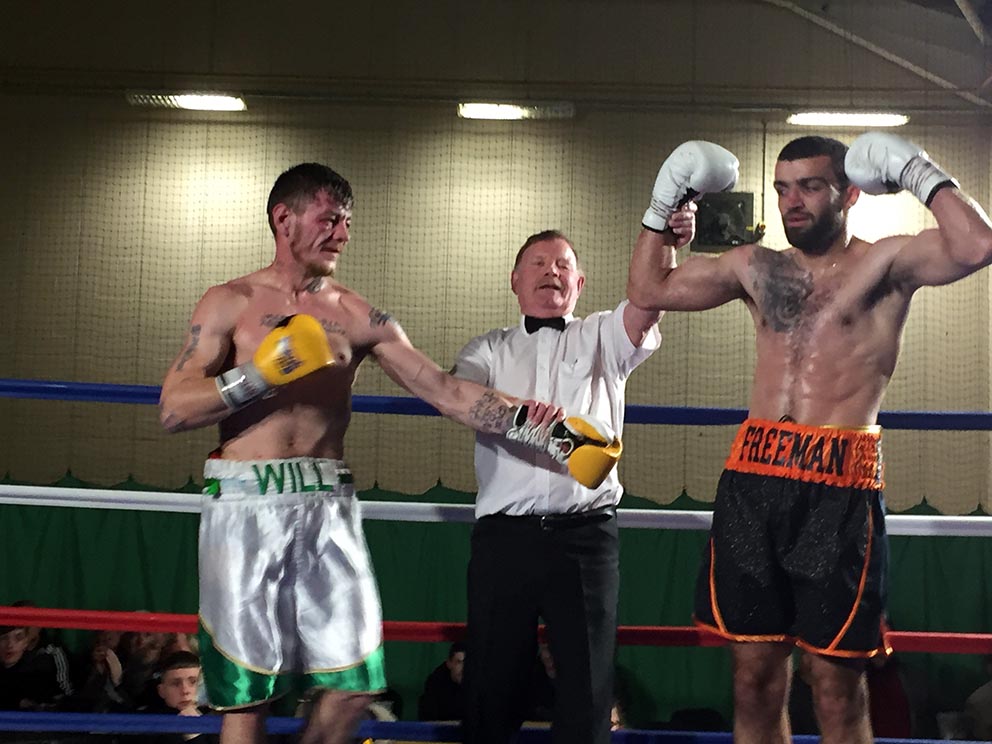 Liverpool’s unbeaten Middleweight prospect Martin Freeman made an emphatic statement on Saturday night, with his fourth round stoppage victory over Will O’Reilly at the Jubilee Sports Bank in his home city.

The 26 year old Liverpudlian exuded class throughout the contest, even when being forced onto the back foot by the ever moving forward all out attack tactics employed by O’Reilly, Freeman just adapted his tactics to counter and control the contest in sensational fashion.

The Liverpudlian’s power was the defining factor of the contest, especially in the fourth, when a massive right from Freeman shook O’Reilly to the core, forcing the Mancunian battler to stagger back onto the ropes and cover up just as the contest approached the minute mark of the round.

In an instant Freeman stepped forward and let rip with a scintillating bombardment of massive lefts and rights, O’Reilly covered up and absorbed the first couple of shots on the gloves and arm, but Freeman’s power and precise placement ensured that the Liverpudlian’s Exocets began to power their way through the Mancunian’s guard with little resistance, after a couple of particularly venomous head shots referee Chris Kelly stepped in and stopped the contest on the one minute and two second mark of the fourth round.

“I am really pleased with my performance from Saturday night.

“Yes it was a tough fight and my opponent not only took some of my best shots but he also gave some good punches too!

“I’m definitely glad I got some good rounds in too as I won my last two fights in the first round.”

Freeman’s gym mate Lee Cooper was also on the card and secured a shut out points victory over Kyle McNicholas.

Both Freeman and Cooper will be back in action on the next Kyle Gallagher promoted Victory Fight Club event at the Jubilee Sports Bank on 28th March 2020.