/** * The header for our theme. * * Displays all of the section and everything up till
* * @package pandrah */ ?> NEWS: Back With A Bang, Ehwarieme Destroys Bracamonte – The Pugilist 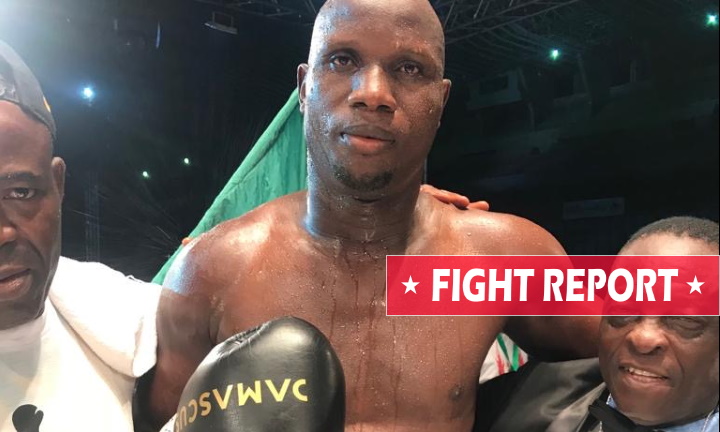 After relocating to the USA and signing with iconic promoter Don King last year, Nigerian Heavyweight Onoriode Ehwarieme returned to his home-country with a bang on Saturday night, December 28, to win the vacant World Boxing Federation (WBF) Intercontinental title in Lagos.

In the main event of a massive show at the Tafawa Balewa Square, 32-year-old Ehwarieme lived up to his imposing nickname, Godzilla, as he emphatically defeated Argentinian Champion Ariel Esteban “Chiquito” Bracamonte (26).

Bracamonte got off to a good start and caught the local mans attention with some good combinations, but it would not be long before Ehwarieme connected with a vicious right hand that send the normally durable Argentinian down.

As he tried to rise, Bracamonte fell to the canvass a second time but miraculously managed to still beat the count of referee Eddie Marshall. However, the experienced South African arbitrator, looking into the eyes of the visibly hurt boxer, decided he had seen enough and correctly waved the fight off at 1:06 of the first round.

Going out live to a massive television audience on Super Sport in 49 countries, Ehwarieme proved he has world-class power, as he took his professional record to 18-1 (17). Bracamonte drops to 9-5 (5). The fight was promoted by Flykite Boxing.