/** * The header for our theme. * * Displays all of the section and everything up till
* * @package pandrah */ ?> Two Sensational Female Fights Feature on LET BATTLE COMMENCE II Live on FITE TV August 15th – The Pugilist 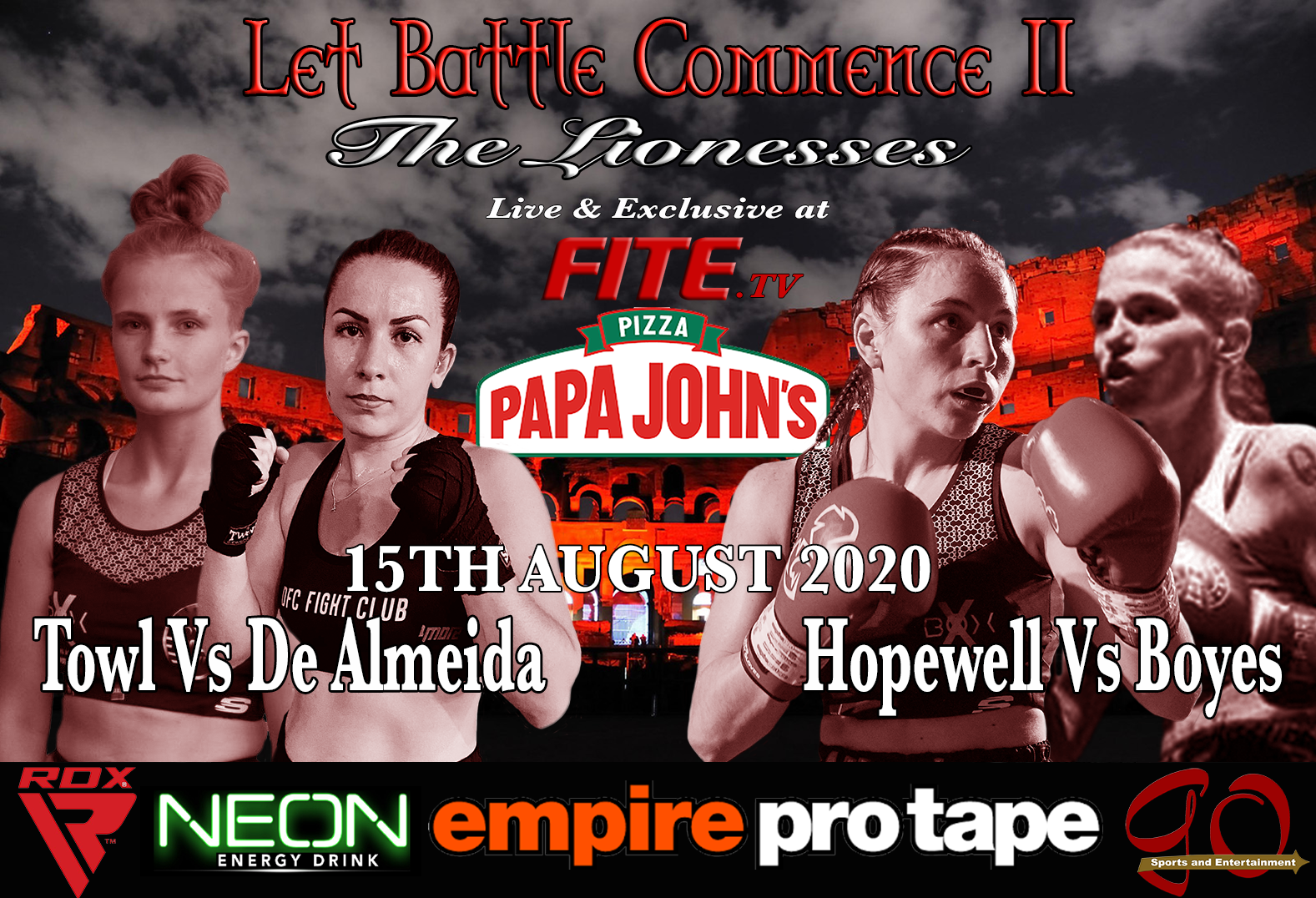 Promoter Lee Mcallister announced earlier that there will be two female contests on the upcoming LET BATTLE COMMENCE II, in association with PAPA JOHN’S PIZZA and NEON ENERGY DRINK, which takes place ‘behind closed doors’ at the OYO Northern Hotel in Aberdeen and broadcast exclusively live by FITE TV on Saturday 15th August 2020.

The first of the all female battles features the UK #1 and World #27 Ranked Super Flyweight Worksop’s Nicola Hopewell in action against Leeds’ Tasha Boyes.

Back on March 7th, just before the UK went into lockdown, Hopewell secured her #1 UK ranking on BoxRanking.Com via a sensational second round knockout victory over Ghana’s Anita Addy at the Hoops Basketball Centre in Barrow-on-Furness.

Hopewell’s opponent on the 15th August will be 28 year old Tasha Boyes from York, who only got into boxing a couple of years ago, after hearing about two sisters whose parents had died in the Manchester Bombing and she wanted to do something to help them in some way, so she decided to participate in a ‘White Collar’ boxing event to raise money for the orphaned sisters. Boyes continued competing successfully on the unlicensed scene, competing in further Charity events to raise funds for those more in need than herself, until earlier this year. On the 15th August Boyes will be making making her professional debut

Nicola Hopewell and Tasha Boyes careers may have been via very different routes, but come the 15th August their journeys will lead them into the very same ring.

Towl began boxing at the age of 11 years and during her esteemed Amateur career Towl secured numerous accolades including;

In March 2019 De Almeida travelled to Bukom Boxing Arena in Accra, Ghana, where she faced and beat the bookies favourite Malaysian Dolphina Waltertony, to secure the coveted Green WBC Belt.

De Almeida has always had world class stand-up skills, so the transition to Professional Boxing should not be too much for the Muay Thai World Champ.

The full card for LET BATTLE COMMENCE II, in Association with PAPA JOHN’S PIZZA and NEON ENERGY DRINK, which takes place on Saturday 15th August 2020 and will be broadcast exclusively live on FITE TV, is:

Six time, Five Division World Champion, and Promoter of the LET BATTLE COMMENCE series, Lee McAllister makes his first appearance on the series and faces Spain based Nicaraguan Edwin Palacios in the headline fight. Palacios has stated he’s up to the challenge and to expect fireworks.

Liverpool’s Scott Mcintyre (4-1-0) is intent on making a major statement when he takes on seriously tough Nicaraguan Wilmer Gonzalez (21-18-1), as just a few fights back Gonzalez KOd a former WBF European and International Champion, the very same Champ responsible for the only loss on the Liverpudlian’s record.

The final fight of the night will pit debutant against debutant as Craig Dick takes on Michael Bassett, both the big lads have stated they will be looking to make a big impression on the 15th August.