/** * The header for our theme. * * Displays all of the section and everything up till
* * @package pandrah */ ?> Three Sensational Female Fights on LET BATTLE COMMENCE II Live on FITE TV Friday 4th Sept – The Pugilist 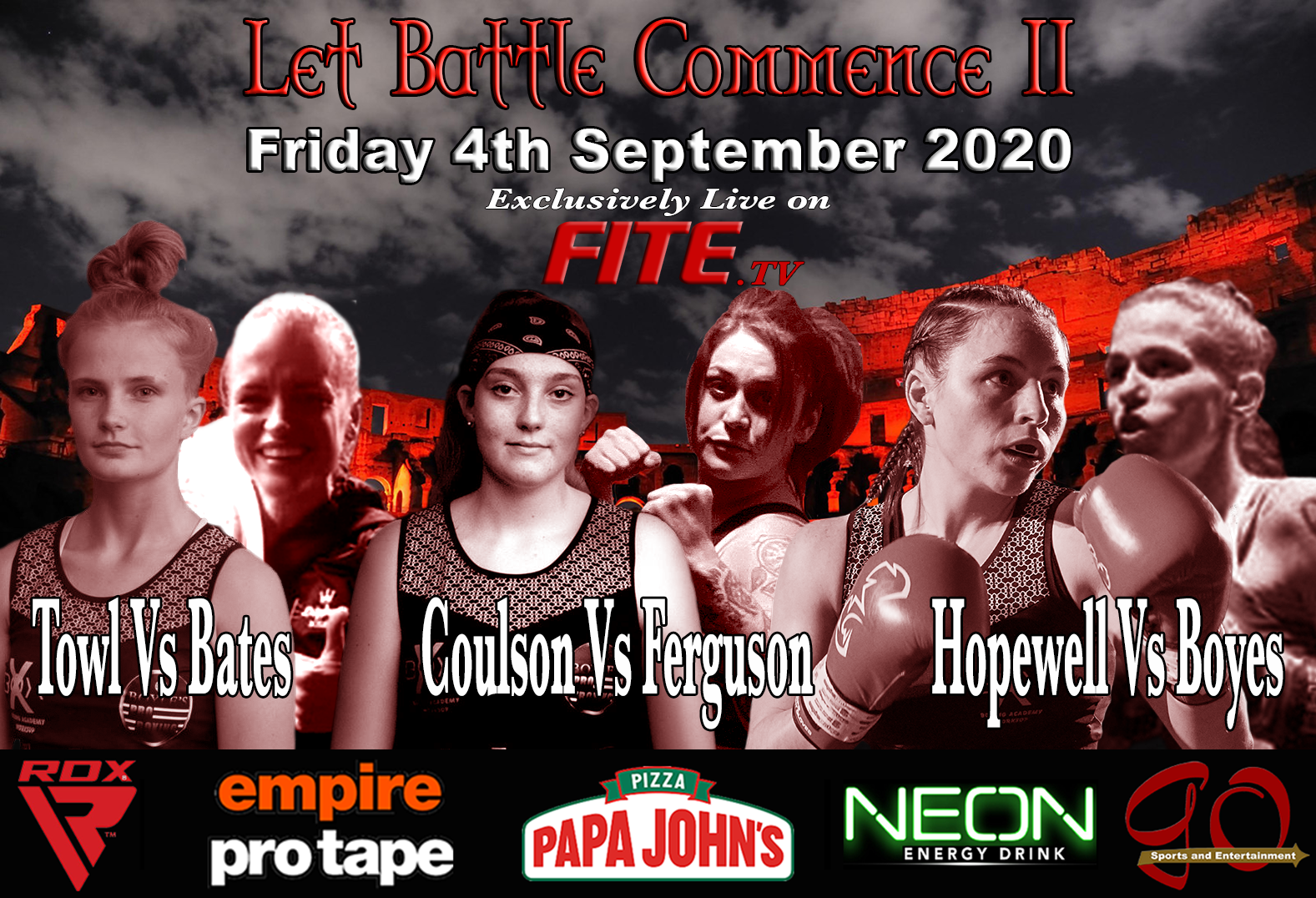 Promoter Lee Mcallister announced earlier that there will now be three female contests on the upcoming LET BATTLE COMMENCE II, in association with PAPA JOHN’S PIZZA and NEON ENERGY DRINK, which takes place ‘behind closed doors’ at the Northern Hotel in Aberdeen and broadcast exclusively live by FITE TV on Friday 4th September 2020.

The fight was quite rightly declared the ‘Fight of the Night’ as it was a closely fought Battle Royale, Bates losing by a very close 58-56 points margin.

Her opponent on the 4th September, Beccy Ferguson, comes from a very different pugilistic background to Coulson, having honed her skills within the realm of unlicensed boxing.

Back on March 7th, just before the UK went into lockdown, Hopewell secured her #1 UK ranking on BoxRanking.Com, as well as secure the Professional Boxing Council (PBC) International Silver Crown via a sensational second round knockout victory over Ghana’s Anita Addy at the Hoops Basketball Centre in Barrow-on-Furness.

Hopewell’s opponent on the 4th September will be 28 year old Tasha Boyes from York, who only got into boxing a couple of years ago, after hearing about two sisters whose parents had died in the Manchester Bombing and she wanted to do something to help them in some way, so she decided to participate in a ‘White Collar’ boxing event to raise money for the orphaned sisters. Boyes continued competing successfully on the unlicensed scene, competing in further Charity events to raise funds for those more in need than herself, until earlier this year. On the 15th August Boyes will be making making her professional debut

Nicola Hopewell and Tasha Boyes careers may have been via very different routes, but come the 4th September their journeys will lead them into the very same ring.

LET BATTLE COMMENCE II, is headlined by Nathan Beattie versus Julio Bendana, and features the aforementioned Ellie Coulson, who will be making her professional debut against fellow debutante Beccy Ferguson from Shrewsbury, Ellie’s team mate, at the Xbox Academy in Worksop and an equally sensational teen amateur star, Hollie Towl also makes her pro debut, against Shrewsbury’s Jaime Bates, whilst another fellow Xbox teammate Worksop’s Professional Boxing Council (PBC) Super Flyweight International Champion Nicola Hopewell is in action for the second time this year and faces York’s Tasha Boyes, Denny’s Kevin Traynor will be hoping to extend his unbeaten record as he faces the seriously Nicaraguan Johnson Tellez andmaking their pro debuts against each other are Super Welterweights Samer Carol and Ben Gore and in the Heavyweight division Craig Dick and Michael Bassett.