/** * The header for our theme. * * Displays all of the section and everything up till
* * @package pandrah */ ?> ADELEYE AND CHAMBERLAIN CO-HEADLINE YORK HALL CARD ON 17 FEB – The Pugilist 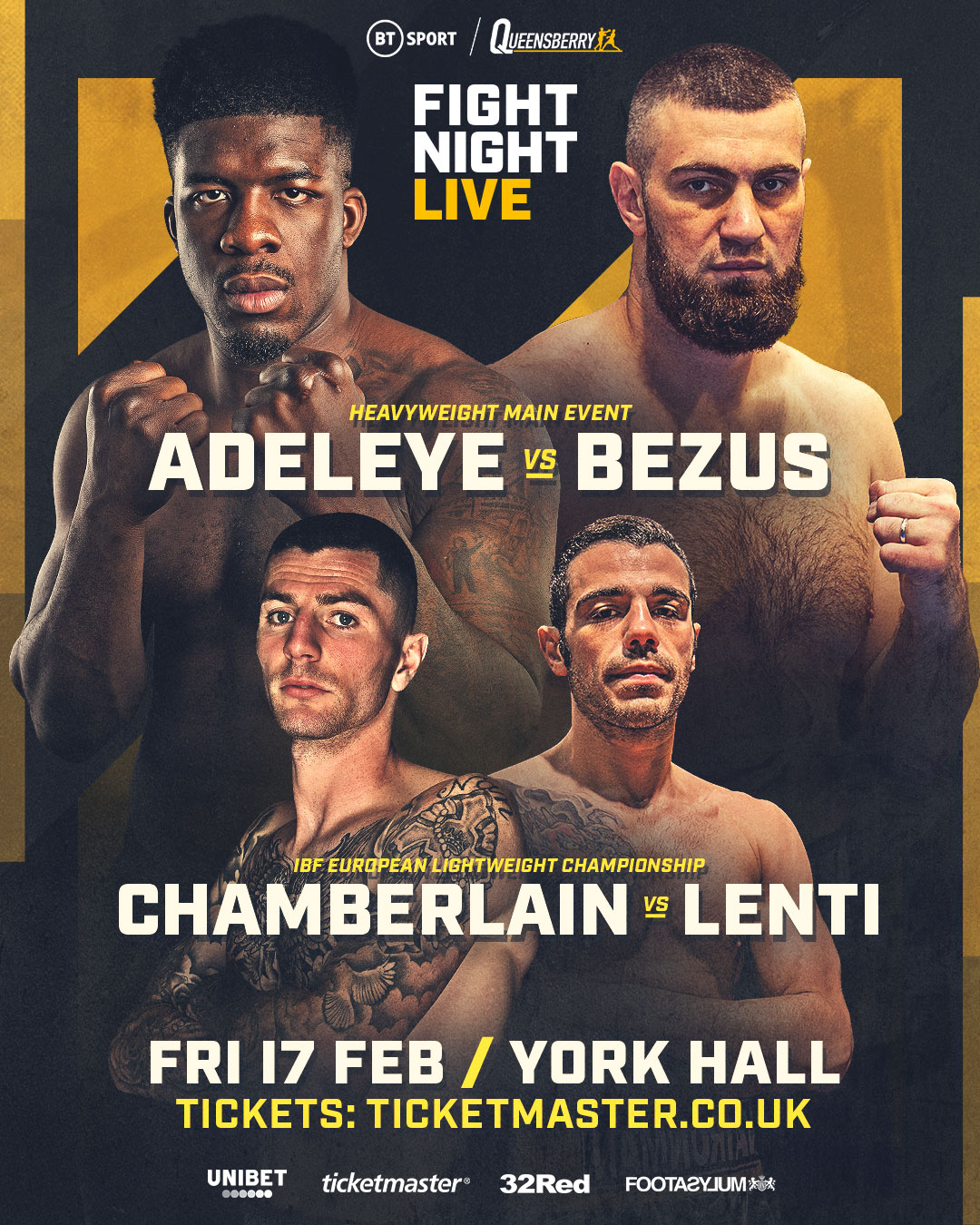 THE IBF EUROPEAN lightweight champion Mark Chamberlain and heavyweight contender David Adeleye are both in headline action when Queensberry makes a return to York Hall on Friday February 17, live on BT Sport.

The 24-year-old Chamberlain, 11-0 (7 KOs) won his title at Wembley with a shutout 10-round demolition of Marc Vidal in July of last year, before being forced to withdraw from a November defence due to a shoulder injury.

The Waterlooville puncher will go up against the Italian Vairo Lenti, 10-4-1 (1 KO), the former champion of Italy who has won his last three fights and last fought in July.

Adeleye, 10-0 (9 KOs), fought only twice last year due to injury, but managed to add two stoppages to his KO-count by extinguishing the threat of Chris Healey and Elvis Garcia.

The Ladbroke Grove heavy faces a fellow unbeaten fighter in the Ukrainian Dmytro Bezus, 10-0 (5 KOs), who resides in Liga, Latvia.

The 6ft 6″ 33-year-old last fought in October of last year, recording a fourth round stoppage over Lukas Wacker at the Arena Riga.

Stylish super lightweight Henry Turner (9-0, 2), who won the WBC International Silver title over in Dubai in November, will make a first defence of his belt at York Hall over 10 rounds.

Thrilling super featherweight prospect Royston Barney-Smith (4-0, 2 KOs) will be looking to make it a knockout treble in his fifth four-rounder after scoring quickfire stoppages in his last two fights, while Northampton super welterweight Carl Fail (7-0, 2) will have his second fight under the Queensberry banner, also over four.

“This is a great opportunity for Mark Chamberlain and David Adeleye to enjoy top billing at York Hall,” said promoter Frank Warren. “I expect both of them to really push on this year and reinforce their status as two of the leading prospects in the country and this will be an important night for them after missing out on fights last year due to injury.

“I believe it is a realistic aim for both Mark and David to be hunting down British titles in the near future and I am confident they would be successful in this.

“Henry Turner won his WBC belt on Middle East soil so I am looking forward to him stepping it up in what will be his 10th fight as a pro and it won’t be long before Carl Fail finds himself in the title mix.

“Royston Barney-Smith is now showing us his genuinely elite quality in the ring and this young man is going to be a big force in years to come. I cannot wait to see him back in action.

“I am also looking forward to checking out the progress of Ezra Taylor, Amaar Akbar, Adan Mohamed and Aloys Jr, who are all showing promising signs and are quickly becoming ones to watch. “

Tickets for the show at York Hall on Friday, 17 February are on sale now available from ticketmaster.co.uk.